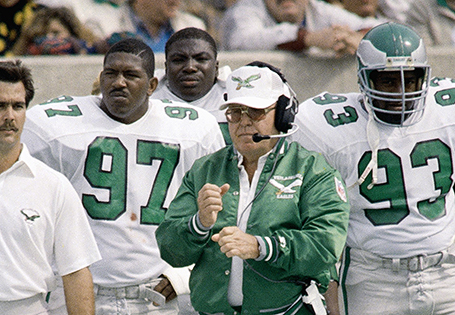 ABOVE PHOTO:  Philadelphia Eagles head coach Buddy Ryan signals in a play during a game in 1986, his first season with the Eagles. To Ryan’s right is Jeff Fisher, a defensive backs coach who went on to become a successful head coach with the Houston Oilers/Tennessee Titans. (AP Photo/Mark Elias)

This week, the world of sports lost two coaching legends that achieved not only success, but also legend status in their individual sports.

On Tuesday, former Philadelphia Eagles head coach Buddy Ryan, arguably one of the greatest defensive coaches in NFL history, died on Tuesday at age 85.  Earlier that day, Pat Summitt, a woman who became a pioneer in women’s sports and the holder of the record for the most wins in collegiate basketball as coach of the University of Tennessee Lady Vols, also lost her battle with early-onset Alzheimers Disease. She was 64.

Both coaches dominated their fields, were revered by the men and women who played for them, and left an indelible stamp on their respective sports.

As the defensive coordinator of the Chicago Bears, Ryan was the man who developed the famed 46 Defense, a defensive scheme that tended to throw more defenders at an offense than the offense could block.  In 1985, Ryan’s defensive scheme led the team to a record-breaking season in which the Bears went 15-1 and won the Super Bowl XX by dominating the New England Patriots 46-10.

During his time in Chicago, Ryan and head coach Mike Ditka argued a lot. In fact, Ditka challenged Ryan to a fistfight during halftime of the Bears only loss of the 1985 season to the Miami Dolphins. One of the last images of the ’85 Super Bowl was of Ryan and Ditka being carried off the field by separate groups of players.

Ryan won his first Super Bowl ring as the linebackers’ coach of the 1968 New York Jets team that upset the heavily-favored Baltimore Colts in Super Bowl III. Along with defensive coordinator Walt Michaels, Ryan came up with a defensive game plan that enabled the Jets defense to force five Colts turnovers.

As the head coach of the Eagles from 1986 to 1990, Ryan used players like the late Reggie White and Jerome Brown, Clyde Simmons and Seth Joyner to build a defense so prolific that it’s arguably the greatest defense without a Super Bowl ring. During Ryan’s tenure, 15 Eagles defenders went to the Pro Bowl.

Ryan was beloved by Eagles fans because of his trash talk and his animosity toward the hated Dallas Cowboys.  With time running out in a 1987 win over the Cowboys, the Eagles scored a late touchdown to run up the score rather than run out the clock.

But in spite of having one of the NFL’s best defenses and quarterback Randall Cunningham, the Eagles were 0-3 in the playoffs under Ryan’s tutelage. He was fired in 1991.

While controversial on many levels, Ryan was beloved by his former player and by the city of Brotherly Love.

“Buddy Ryan was arguably one of the greatest defensive masterminds in NFL history and forever left his mark on the Eagles organization and the city of Philadelphia,” Eagles Chairman and CEO Jeffrey Lurie said in a statement.

While Ryan made his mark in a sport that was for all intents and purposes established, Summitt excelled in a sport where she had to blaze a trail. 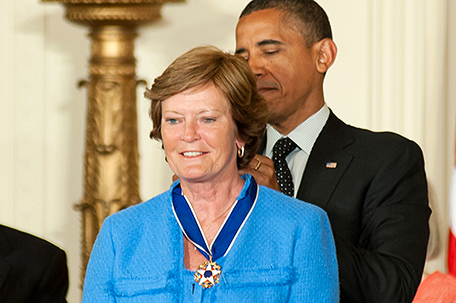 Univ. of Tennessee Lady Vols coach Pat Summitt receives the Presidential Medal of Freedom from President Barack Obama at a ceremony at the White House in 2012 in Washington, D.C. Summitt lost her battle with Alzheimers Disease last week. She was 64. (Rena Schild / Shutterstock.com)

When the University of Tennessee handed a 22-year-old Summitt the Lady Vols basketball team to coach in 1974, women’s basketball was barely recognized by the NCAA as a varsity sport and she was barely older than the players she coached.

In 1982, Summit led the Lady Vols to the first women’s Final Four. During her legendary career, she would amass 1,098 wins—more than any other basketball coach in the NCAA—and would also win eight national championships.

But most importantly, Summit molded young women into not just great basketball players, but also into successful women on and off the court. Summitt was a big believer in the concept of the student-athlete, mandating class attendance (and sitting in the first three rows of the classroom) to get on the court. The Lady Vols had a 100 percent graduation rate as a result.

Summitt was saluted by her peers for the impact she had on women’s college sports.

“She is irreplaceable,” Rutgers head coach C. Vivian Stringer said in a statement. “No one can even attempt to represent more of the progress of women’s basketball than her. We talked many times about the importance of continuing to further our sport. No one has more of an impact than her.”

“I’m deeply saddened by what has happened to Pat Summitt,” said Dawn Staley, head women’s basketball coach at the University of South Carolina. “I’ve been a fan of hers and the way she so passionately and profoundly led our game. I can’t think of anyone whose footsteps I would want to follow other than hers. She has passed the torch to all who coach; it’s now our turn to make her proud.”