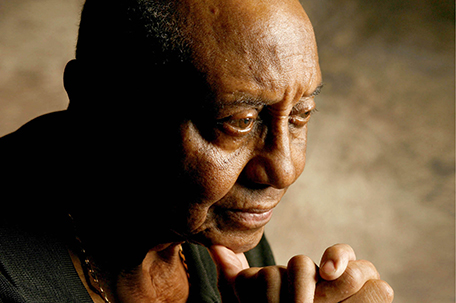 For Philadelphia’s basketball community, John Chaney was more than just a coach.

In a city with as rich of a basketball tradition as Philadelphia’s, putting together a Mount Rushmore of all-time greats would be tough.

With so many legendary players and coaches like Wilt Chamberlain, Julius Erving, Allen Iverson, Sonny Hill, Earl Monroe and Dawn Staley, the mountain would have to be huge. You couldn’t argue against any of those Philly basketball icons being a part of that monument.

But if it doesn’t include John Chaney, the legendary coach that put Temple University’s mens basketball team on the map, the monument would be not only incomplete, but woefully inadequate.

On Jan. 29, John Chaney, a part of Philadelphia basketball lore, died. He was 89.

From his days as a high school point guard at Ben Franklin High School — where he was the Philadelphia Public League Player of the Year in 1951— to when he put two college basketball programs on the map — Cheyney State, an HBCU that won the Div. II national championship in 1978 and Temple — Chaney was always a leader of young men.

Before I came to Philadelphia as a sportswriter, I saw Coach Chaney leading Temple against North Carolina in the second round of the 1984 NCAA Tournament and heard one of the announcers say that Temple was an up-and-coming program.

Four years later, Chaney was leading the then No. 1 ranked Owls into the Elite Eight against Duke and Temple was on the map as a national powerhouse. Chaney would go on to win 741 games for Cheyney and Temple, which included five trips to the Elite Eight and eight Atlantic-10 Conference titles.

With an emphasis on not turning the ball over and his signature 2-3 matchup zone defense, Chaney’s Temple teams were a tough out during the NCAA tournament. I remember seeing higher-seeded and more talented teams get bounced out within the first two rounds because they could not solve the riddle of Temple’s defense.

But beyond the NCAA Tournaments and matchup zones, Chaney will always be remembered for the tough love he gave to his players and for being the father figure that a lot of young men that didn’t have fathers in their homes.

“I think of him as a mentor, a father figure and a leader in this community,” former player and now Temple head coach Aaron McKie said on ESPN’s College Day. “He was just someone who cared for so many.”

Current South Carolina women’s basketball coach and former Dobbins star Dawn Staley tweeted: “I’m deeply saddened by the passing of someone I hold dear to my heart. He has done so many great things with his life, but giver is amongst the top. Giver to the voiceless, the underprivileged, the game, to his peeps….I happened to be one of them.”

Anyone who played for Temple during Chaney’s coaching tenure remembers those 5am practices. Chaney was a firm believer that a disciplined team was hard to beat and you saw that during those 17 NCAA tournament appearances for the Owls.

Chaney was a passionate opponent against NCAA Proposition 48 because he felt it denied young Black athletes the opportunity to get a college education because of low standardized test scores. Yet, Chaney still brought those players in and made sure they graduated. When I was teaching an English class at Temple, I had one of Chaney’s players and he never missed a class because he knew the coach wouldn’t tolerate that.

My favorite memory of Chaney dates back to my first day as a sports reporter in Philadelphia. I was doing a story for the Philadelphia Tribune on why the U.S. men’s basketball team was struggling at the 2004 Olympics.

I interviewed then-St. Joe’s coach Phil Martelli and former Drexel head coach Bruiser Flint, but the best interview I got was from my phone interview with Chaney.  I had always heard that Chaney would often light up when you’re talking about the basics of basketball.

When I talked about the U.S. playing defense and not scoring, Chaney passionately described it as “working hard all day and not making any money. You do all that hard work, but we haven’t scored.” Listening to Chaney breaking down the game the way he did was like listening a pastor preach a sermon on Sunday.

That was Coach Chaney’s passion for the game.

On more than a few occasions, Tribune sportswriter Don Hunt and I would go past Coach Chaney’s office just to say hi and kick back for a minute. Sometimes, you could catch Chaney passionately talking about race relations or the mustard greens he got from the Italian Market in South Philly.

Even when Chaney’s temper got of hand, he never really held grudges. After the altercation between he and then-University of Massachusetts head coach John Calipari back in 1994, the two became friends.

Said Calipari in a recent Twitter  post: “Coach Chaney and I fought every game we competed – as everyone knows, sometimes literally – but in the end he was my friend. Throughout my career, we would talk about basketball and life. I will miss those talks and I will my friend. Rest in peace, Coach!”

Funeral services will be held for Coach Chaney on Monday from 9a.m. to 1p.m. at the Liacouras Center on Temple’s Main Campus on North Broad Street. A private viewing for the family will be held at 2p.m., followed by a private, invitation-only service that will also be streamed online.

Here is the link for the public service: https://www.youtube.com/watch?v=zo8lSSjq2dA&feature=youtu.be.