Reactions to the death of NBA great Bill Russell 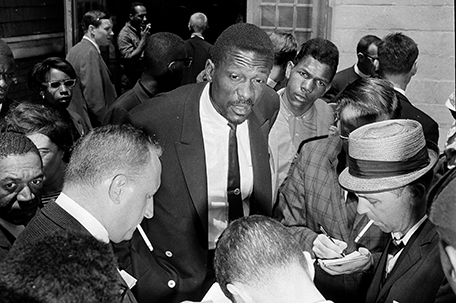 ABOVE PHOTO: Boston Celtics’ star Bill Russell talks with newsmen about the boycott of Boston public schools by African Americans, June 18, 1963, in Boston. Russell spoke to some of the estimated 3,000 children who stayed away from regular classes but attended special sessions called by black leaders. Children were asked to stay away from regular classes by their parents in protest against what they said was actual if not legal segregation. (AP Photo/Frank Curtin)

“Bill Russell was the greatest champion in all of team sports. The countless accolades that he earned for his storied career with the Boston Celtics — including a record 11 championships and five MVP awards — only begin to tell the story of Bill’s immense impact on our league and broader society.”

“Today, we lost a giant. As tall as Bill Russell stood, his legacy rises far higher — both as a player and as a person.”

“The promise of America is that we are all created equal and deserve to be treated equally throughout our lives. We’ve never fully lived up to that promise, but Bill Russell made sure we never walked away from it. By August 1963, he had won six of what would be 11 NBA championships in his 13 years in the league with the Boston Celtics, a defining career that would include five regular season Most Valuable Player awards, an Olympic gold medal, and serving as the first Black coach of any major sports league in America. But on the historic day of August 28, 1963, there he was at the steps of the Lincoln Memorial as a towering champion for freedom, equality, and justice as Dr. King delivered a dream for the Nation.

That was Bill Russell. From a childhood in segregated Louisiana to a career playing on the biggest stages in sports at the height of the Civil Rights Movement, Bill faced the hostility and hate of racism embedded in every part of American life. Yet, he never gave up. Throughout his life, he forced us to confront hard truths. And on this day, there are generations of Americans who are reflecting on what he meant to them as someone who played for the essential truth that every person is entitled to be treated with dignity and respect.

Bill Russell is one of the greatest athletes in our history — an all-time champion of champions, and a good man and great American who did everything he could to deliver the promise of America for all Americans.”

“To be the greatest champion in your sport, to revolutionize the way the game is played, and to be a societal leader all at once seems unthinkable, but that is who Bill Russell was. Bill was a champion unlike any other in the history of team sports — an 11-time NBA champion, including winning eight consecutive titles, a five-time MVP, an Olympic Gold Medalist and the NBA’s first Black head coach.”

— the Boston Celtics said in a statement.

“Rest in peace Bill Russell you were everything we all aspired to be, your winning spirit will live forever my friend. Thank you for your words of wisdom.”

“He was one of the first athletes on the front line fighting for social justice, equity, equality, and civil rights. That’s why I admired and loved him so much. Over the course of our friendship, he always reminded me about making things better in the Black community.”

“Bill Russell was a pioneer — as a player, as a champion, as the NBA’s first Black head coach and as an activist. He paved the way and set an example for every Black player who came into the league after him, including me. The world has lost a legend … may he rest in peace.”

“Bill Russell was bigger than basketball, even though he was one of the greatest players of all times. He stood for Civil and human rights before it was trendy, in fact when he did it, it was risky! A true giant on and off the court, May he Rest In Peace and Power!”

“People like Bill, he’s a bridge to all the struggle that generation went through to get to that point. If everyone could take a little bit of what Bill Russell did for his entire life, we’d be a better world. The things he did with Kareem and Jim Brown and pushing everything forward with equality. They were the first to do it when it meant giving something up along with Muhammad Ali. Giving up things they loved to do for the betterment of this country.”

“Bill Russell was a once in a generation activist athlete who made all of those around him better on and off the court. He had a career of firsts and led the way for so many. I admired him my entire life and he had a huge influence on my career and my life. He was the ultimate leader, ultimate team player and the ultimate champion.” — Tennis great Billie Jean King

A legend among the ancestors