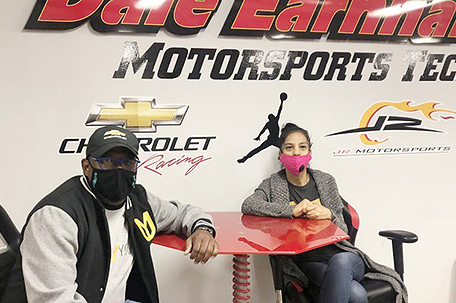 ABOVE PHOTO: Urban Youth Racing School founder Anthony Martin, left, and his wife Michelle Martin pose for a photo at the school, Friday, Oct. 30, 2020, in Philadelphia. The school has made it its mission to introduce inner-city youngsters, most of them Black, to the motorsports world.  (AP Photo/Dan Gelston)

PHILADELPHIA — Jysir Fisher was whisked into victory lane at Dover for a whirlwind of hugs and high-fives with race winner Kyle Larson. Fisher never really watched NASCAR and had no idea who Larson was when they were seated only days earlier at the same table at an awards banquet for a youth racing school. The Philadelphia teen’s interests lean toward engineering, yet there he was last October, soaking in the spoils of winning a playoff race with his new favorite driver.

The two formed an instant bond at the banquet: Larson used his Chevrolet connections to get Fisher into the race, and three nights after they met, the driver won his only NASCAR race of the 2019 season. Larson even gave his email address to Fisher and told him to write any time.

“He’s like the real-deal racer,” Fisher said he thought of Larson.

The next time Fisher and Larson spoke face to face, the topic would have seemed inconceivable at that October ceremony for the Urban Youth Racing School.

Larson, an advocate for the Philly-based program that creates opportunities in racing for minorities, was caught using a slur during an iRacing event in April. Larson lost his NASCAR ride, his sponsor, his multimillion-dollar contract — and perhaps shattered his reputation with the kids and the school where he stood as a role model. That’s what led Larson back to the school as part of his racial repentance tour — which included a visit to the site in Minneapolis where George Floyd died — and he met with students, their families and instructors to have real conversations about the hurt he caused.

The 28-year-old Larson wanted to apologize to Fisher for the slur, not by Zoom or text, but eye to eye in the same room. Unsure how he would feel when he saw Larson, Fisher was open to a conversation with someone suddenly labeled a racist.

“I didn’t think of Kyle as that person,” Fisher said. “I didn’t want to make any assumptions before I actually heard the story from him. I saw the video and everybody was giving their opinions and stuff. But I wanted to know the real story, how he was feeling, from Kyle.”

Fisher said Larson was sincere in his apology, realized the pain he caused and how ignorant he had been for failing to realize how wicked the N-word is to the Black community.

“He didn’t fully get the full meaning behind the word,” Fisher said. “He thought it was cool to use it. It wasn’t.”

The 18-year-old Fisher, a mechanical engineering major at Morehouse College, believed an “honest mistake” was made and forgave Larson for the slur. Larson explained he used the word “ casually, almost like a greeting ” and vowed to rid it from his vocabulary. They’ve become texting buddies since, and Fisher was sure to congratulate Larson when he landed his 2021 NASCAR ride with Hendrick Motorsports.

Fisher plans to attend a NASCAR race in the area next season when Larson returns to the track. He might see him sooner should Larson continue his visits to the school that started in 1998 with a bold plan to take kids from the inner city to the inner circle of stock car racing.

The Urban Youth Racing School was hatched by Philly native Anthony Martin, who left a sports marketing career in which he rubbed shoulders with the likes of Randall Cunningham and Charles Barkley to pursue his love of racing and mix it with a dream of introducing inner-city kids to NASCAR. The school has served more than 7,500 students from ages 8 to 18 over the last 22 years and teaches all aspects of auto racing, including driving and Black racing history. UYRS uses a science, technology, engineering and math curriculum and students are quizzed and graded and compete for various year-end awards.

Fisher won the 2019 Chevy points championship for his work in class and on the go-kart track and earned a trophy about as big as his 5-foot-7 frame. Chevrolet has helped subsidize the program, one Martin and his wife, Michelle, said was composed of about 90% young Black males.

Larson got a taste of the curriculum when Michelle Martin gave him a history lesson on racial inequality that spanned 400 years.

“I said, ‘This really sucks for you, Kyle, because you said what you said not only in the middle of a viral pandemic, but we also have this racial pandemic that’s happening,’” she said. “But I understood how he said the word. I understood the context of the word. But I also needed him to understand what our boys go through. The racial profiling. What that word means when used in a specific way. The minute you use it, the minute you’re not Black and use it, it turns into a whole different word with a whole different meaning.”

The Martins saw raw pain from Larson, and at one point, he was on the brink of tears. Larson, who is half Japanese and was part of NASCAR’s diversity program, earned a second chance with the school.

Larson surprised the school when he bought it two racing simulators and gave them a test run in September against select students.

“I was able to go back and just have some fun with them, try to coach them along and give them some input on how to be faster on the simulator,” Larson said. “Just trying to build that relationship. It’s been tough to do throughout COVID, just because you can’t get together with everybody. I think in the future, once that gets easier to do, I’ll be able to build even more relationships with all the other kids.”

Larson visited the school without fanfare — one trip came the same weekend the Cup Series raced up Interstate 476 at Pocono — and NASCAR officials also have toured UYRS and the new leadership regime has strengthened ties with the program.

Once considered a can’t-miss future star in NASCAR, Larson was grateful the school was willing to give him a second chance.

“I think they can see my heart in the conversations I’ve had with them,” Larson said.

The nonprofit school suffered some lean years when the money flow waned and has moved locations and adjusted the syllabus to reflect changes in motor sports. UYRS has partnered with iRacing and will form its own league in the popular simulated racing series. Will Smith’s Overbrook Entertainment was set to produce a documentary series, but the deal fell through and now CBS is in the picture to potentially spotlight the program.

UYRS said plans are in motion to build a short track and an indoor go-kart track in southwest Philadelphia within the next 18 months. Mayor Jim Kenney has encouraged the school to expand the age range to up to 25 years.

With Larson’s redemptive path putting the school back in the spotlight, UYSR is more determined to finally make a dent in NASCAR.

“We want to have a driver,” Anthony Martin said. “I would like to see one of our students, some of our students, have the opportunity. In our past history, we’ve had students that have had the talent to become Cup drivers. No question about it. Obviously, it came down to funding. That’s the reason they did not get there.”

Fisher could be their first hopeful prospect to make the leap to stock car’s elite series. In a sport in which minorities are scarce at all levels, Fisher says his “big dream” is now building engines for a NASCAR team — maybe even one year down the road for one of Larson’s Chevys.

The Fast And The Furious