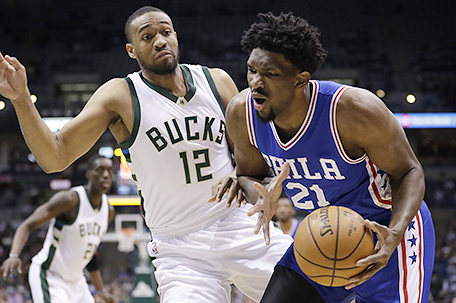 ABOVE PHOTO:  Philadelphia 76ers’ Joel Embiid tries to drive past Milwaukee Bucks’ Jabari Parker during the first half of an NBA basketball game Monday, Jan. 16, 2017, in Milwaukee.  (AP Photo/Morry Gash)

Now that the team appears to be making progress, the phrase “trust the process” is no longer a laughing matter for the Philadelphia 76ers.

When Philadelphia 76ers head coach Brett Brown visited the Philadelphia Eagles training camp at Nova Care, he told reporters that he could see the light at the end of a long tunnel with his young team, expressing some cautious optimism with the pending debut of Joel Embiid and No. 1 draft choice Ben Simmons.

So far this season, Brown has a reason to believe that this light at the end of the tunnel is no longer an oncoming train.

Fans are starting to see some semblance of progress thanks to the way that the Sixers (14-26) are playing. While that probably won’t lead to a playoff spot this year, you get the feeling that a playoff game at the Wells Fargo Center isn’t beyond the realm of possibility.

The Sixers have won seven of their last 10, three of which came against playoff teams, the most recent being a 94–89 win over the Toronto Raptors (28-14).

His team’s effort on defense over these last 10 games is something that Brown can be proud of. The Sixers held a Raptors squad that averages about 111 points per game to just 89 points.

“We’re playing with a defensive mindset,” Brown said. “There is a belief in each other amongst the team that it’s the best that it has been since I’ve been here. There’s a rhythm to what we’re doing, there’s a beat to what we’re doing.”

One of the obvious reasons for the Sixers current run of success has been Embiid, who despite being limited in terms of minutes has proven that quality is far more important than quantity. He has scored at least 20 points in his last 10 games.

In the win over the Raptors, Embiid scored 26 points and pulled down nine rebounds.  It was his defense and clutch free-throw shooting in the last 30 seconds that enabled the 76ers to come away with the victory.  On the defensive end, Embiid came up with a huge block and rebound of a shot by Raptors guard Kyle Lowry. He sank four free throws.

“When you have a five man that can make free throws … if you can find a five man that has the defensive presence that Joel has and isn’t a liability on offense when they start fouling. … If they wrap him up and he’s a 40 percent free-throw shooter, you’ll have problems,” Brown said. “[Embiid] shot 32 free throws in the last two games. So apart from the percentage, the volume that he gets there (free-throw line) makes it a luxury, too.”

Embiid said the biggest takeaway from beating Toronto was the confidence they gained from beating a playoff contender like the Raptors.

“Winning against the second-best team in the Eastern Conference is just amazing and we’re going to keep on working,” he said. “Everybody is buying into the system and coaches are doing a great job of preparing us and everybody has bought in and we’re playing good basketball.”

Brown said he was really impressed with Dario Saric’s commitment to contribute on the defensive end. In the second half of the Raptors game, Saric had two consecutive blocked shots including one against Raptors power forward Jared Sullinger.

Known as a guy who likes to hit the outside shot, Saric has really made a commitment to playing defense.

“I try to bring the teams some kind of energy,” Saric. “I just want to be in the game.”

The Sixers aren’t ready to be a playoff team just yet, they’re still are a work in progress and that’s what the fans want to see. They want to root for a team that’s moving in the right direction.

Finally, fans have a reason to trust the process.