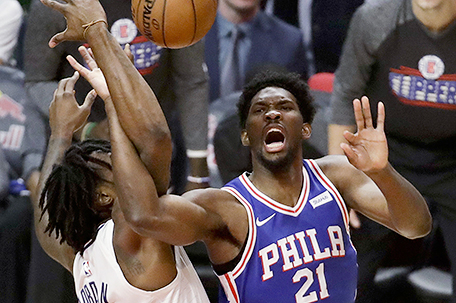 With the play of Joel Embiid and Ben Simmons, there appears to be light at the end of the tunnel for the Philadelphia 76ers.

There was a point in time when fans of the Philadelphia 76ers could see only darkness with very few glimmers of hope for a franchise that hasn’t won a title since 1983 and last went to the NBA Finals in 2001.

For the last four seasons, fans have had to rely on a painful process that yielded some questionable draft choices and very few wins. The light at the end of that tunnel was too far in the distance for anyone to see.

But after the first 14 games of the 2017-18 season, long-suffering 76ers fans are starting to see the light of this team’s potential burning bright and so is the rest of the NBA.

The Sixers (8-6) ended their five-game road trip with two impressive wins over the Los Angeles Clippers and Lakers and coming away with a 3-2 record.

In the win over the Lakers, the national TV audience got a good look at 76ers center Joel Embiid, who had his most dominant performance as a Sixers and Ben Simmons, who reminded Laker fans of some guy named Magic Johnson.

Against both the Lakers and the Clippers, Embiid pretty much abused anybody who attempted to defend him.  Against the Lakers Wednesday night, Embiid scored a career-high 46 points (14 of 20 shooting) with 15 rebounds, six blocked shots and seven assists.

The Lakers had no answer for the big man, who scored from just about anywhere he wanted to. He took on Lakers defenders in the low post and frustrated them from the perimeter. He was 2-of-3 from the three-point line.

“He was obviously dominant,” Sixers coach Brett Brown said after the Lakers win. “You try to find that balance between walking the ball up the floor every time and posting Joel—We ended up doing that and he was just dominant. There’s always that slippery slope of playing with pace and movement and realizing that you have Joel Embiid. Tonight, we realized we had Joel Embiid and the stat line that he produced was dominant.”

Embiid played 34 minutes and is getting more and more time on the floor.  Brown said that the more time Embiid is on the floor with his teammates the better he’s going to get and if your 7-foot-2 center is better the team gets better as well. 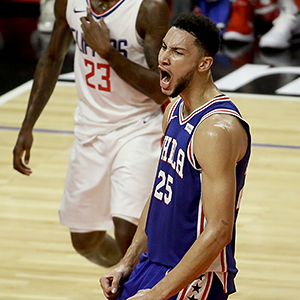 Philadelphia 76ers guard Ben Simmons celebrates after making a basket against the Los Angeles Clippers during the first half of an NBA basketball game in Los Angeles, Monday, Nov. 13, 2017.
(AP Photo/Chris Carlson)

Speaking of guys who are good at making their teammates better, Ben Simmons is getting better in his own right. Were it not for Embiid destroying the Lakers with his scoring  and low-post play, Simmons might have garnered all the headlines with his performance.

The former LSU star scored 18 points, dished out 10 assists, and grabbed  nine rebounds — one rebound away from a triple double, in the Laker game.

In what was billed as a matchup between future superstars, Simmons showed just how grossly overhyped Lakers rookie Lonzo Ball might be. With his stellar play, Simmons changed this Shakespearian matchup from “Julius Caesar” to “Much Ado About Nothing.”

“We all see his gifts, his skill in open court, we see his amazing athleticism and skill package at 6-foot-10,” Sixers coach Brown said. “Ben had a borderline dominant type of game.”

If anything, Simmons proved that he was more of the truth than the bluster that comes out of Ball’s father Levar would indicate.

As we all know in this vast sports universe of hypemeisters and wannanbe ballers, talk is extremely cheap. You can have all the carnival barking in the world, but if  you can’t bring it on the court,  you’re just selling woof tickets.

And if you’re not careful, you might find out that the light in the tunnel for your team might be coming from an oncoming train.

Fortunately, it appears that the Sixers won’t have that problem anymore.