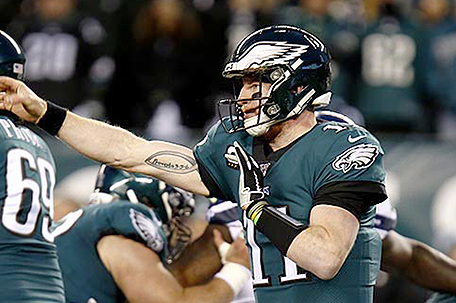 The tie between the Philadelphia Eagles and Cincinnati Bengals portends a long season for Philadelphia sports fans.

On one level, Philadelphia Eagles fans can take some solace in the fact the Birds 23-23 overtime tie with the Cincinnati Bengals last week at an empty Lincoln Financial Field wasn’t a loss.

But it also wasn’t a win, and how the game ended has been yet another source of fan angst.

For those who believed that this was supposed to be an easy win over a young, inexperienced Bengals squad, the villain will be an uneven performance by Carson Wentz, who completed 29-of-42 passes for 225 yards with one touchdown and two interceptions. He had a 62.2 rating.

So far this season, Wentz has thrown six interceptions against three touchdown passes. He is 29th in the NFL in completion percentage (59.8%) and some around the NFL who are saying that Wentz is regressing in his fifth year.

On the negative side of things, in the game against Cincinnati, Wentz had his struggles with the interceptions and missed more than a few open receivers. In fact, a missed pass to a wide-open Miles Sanders early in the fourth quarter cost the Eagles (0-2-1) the lead and a possible win in regulation.

“Obviously, I just have to be better [and] handle some of these. Some of them are communication, just making sure we’re on the same page with everybody, and some are just poor throws,” Wentz said. “I have to be better, and I will. We’re still meshing and gelling as a team and building the chemistry.”

Eagles head coach Doug Pederson said he may have to put Wentz in situations where he’s not doing too much thinking and take advantage of the plays he can make outside of the pocket.

“I think one of the ways that we do that and to kind of maybe unclutter his mind some is to play fast, play up tempo where players don’t have to think, they just react,” Peterson said during his Monday press conference. “That has been a recipe for us over the years, and it’s something that we may have to lean on a little bit more.”

In Wentz’s defense, he was playing without DeSean Jackson, who left the game at halftime with a hamstring injury and tight end Dallas Goedert, who left the game with an ankle injury.  That said, Wentz and the Eagles offense were inconsistent on offense for a good portion of the game.

There were also a few promising things from Wentz in Sunday’s game. Near the end of the first half, Wentz hit reserve wide receiver Greg Ward for a 29-yard touchdown pass to enable the Eagles to take a 13-10 lead at halftime.

With the Eagles trailing by seven, Wentz drove the team 75 yards in 11 plays that ended with a seven-yard run by the former North Dakota State star to tie the game that no one would win.

On that final drive, Wentz showed that he could make plays on the run and he seems to be more comfortable when he is making plays with his feet whether he’s running the football or buying time to pass the ball down field.

“One of the things probably that we can rely on maybe a little bit more with Carson is his ability to escape the pocket. Those big plays yesterday came on just that, his ability to extend plays,”

The thing that we’re going to see moving forward will be whether or not Wentz can recover from his current struggles.

The Eagles go on the road this weekend to play the San Francisco and have another road game in Pittsburgh before coming back home to play the Baltimore Ravens. This is the part of where Wentz needs to bear down, play with a chip on his shoulder instead of looking over it.

The team’s next challenge takes place on Sunday night when the Eagles take on the NFC Champion San Francisco 49ers at 8pm on NBC-10.