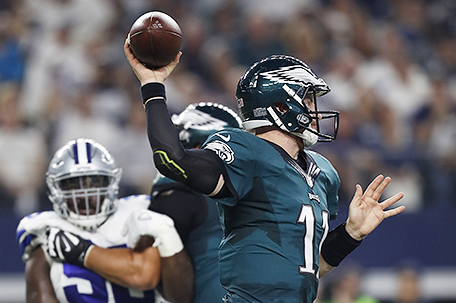 ABOVE PHOTO:  Philadelphia Eagles quarterback Carson Wentz (11) passes during an NFL football game against the Dallas Cowboys, Sunday, Oct. 30, 2016, in Arlington, Texas. The Cowboys defeated the Eagles in overtime, 29-23.  (Ryan Kang via AP)

Throughout Organized Team Activities and training camp, head coach Doug Pederson was often asked about whether or not the Philadelphia Eagles would get a game-breaking wide receiver.

Pederson’s response was to say that wide receivers were going to make big plays through the Eagles scheme and he then added Dorial Green-Beckham in hopes that he would be that guy to stretch the field.

Seven games into the season, we are still talking about dropped passes and a lack of separation. There was talk this week that the Birds were looking for a wide receiver before Tuesday’s trade deadline, with San Francisco 49ers wide receiver Torrey Smith being the biggest name mentioned in possible trade talks.

Although it would be more excusable if it were, the problem with the Eagles’ passing game isn’t quarterback Carson Wentz. The rookie signal caller had an efficient game in Sunday’s 29-23 overtime loss to Dallas.

The problem is that the Birds receivers scare no one going deep. When the scariest receiver in your passing game is running back Darren Sproles, you have a problem that’s going to keep you out of the playoffs. In the last four games, the Eagles have had just one play beyond 30 yards. In fact, the team’s wideouts have made only two catches beyond 30 yards.

Were it not for a 73-yard touchdown pass from Wentz to Sproles on what turned out to be a broken play, the passing game would look even worse than it already does. Jordan Matthews, the team’s best wide receiver, is a go-to guy in the red zone and a solid possession receiver, but he’s not going to flip field position on one play for you, something the Eagles really need right now.

While doing it may make fans crazy, Pederson said that the old “dink and dunk” passes down field can work.

I guess that’s a politically correct answer to give to reporters during a press conference to mask an obvious weakness in your passing game. But let’s be honest here. In the games that the Eagles lost to their NFC East rivals — the Cowboys and the Washington Redskins — big play receivers Dez Bryant and DeSean Jackson made, well, big plays.

And most importantly, they caught the ball. That’s another problem that the Eagles receivers seem to be having right now. When it comes to dropped passes, the Eagles are among the worst teams in the NFL. In fact, the website ChartingSports.com puts them at the top of the league in dropped balls when you measure the ratio of targets to balls dropped.

One of the most glaring examples of this during Sunday’s game was when wide receiver Nelson Agholor mishandled a ball that could have converted a third down deep in Cowboys territory on the Eagles first possession of the game.

While he wasn’t the only one dropping balls, Agholor was the only one getting testy with reporters when asked about it.

Now I understand why Agholor, the number one pick in the Eagles 2015 draft, might be tired of this particular topic coming up.

But if you want us to stop asking you about dropped passes, you could, I don’t know, Stop. Dropping. Passes.

If Agholor spent as much time living up to the hype that a number one draft pick is supposed to generate as he does ranting at reporters asking him why he can’t seem to do the job he was drafted to do, which is to get open and catch the ball, he might get a little further along.

You would think the Eagles would have learned something from the NFC title games the team lost during the Donovan McNabb Era. During that time, the Eagles had a group of wide receivers similar to the crop the team has now: serviceable guys who scared no one.

Once Terrell Owens came to the Eagles, however, the team had a deep threat that the league had to respect. They won the NFC Championship, and while they didn’t win the Super Bowl, at least they went.

So while Pederson can dress it up anyway he likes, his current crop of mediocre receivers has made things a lot easier for defensive coordinators.

And until the team does something about that, they’ll be watching the Super Bowl from the living room like the rest of us.