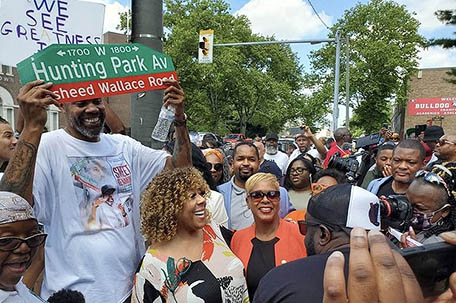 On Friday, June 24, the City of Philadelphia renamed the 1700 block of West Hunting Park Avenue in North Philadelphia in honor of Rasheed Wallace, a city native and NBA legend.

“I’m thankful,” said Wallace. “It’s not just me that’s celebrating this today. It’s for the city, it’s for my family, with me being a Philly guy, a Philly native, this is special. It’s real special because now this is something that’s going to be immortalized not only for me, not only for Gratz, but again for my family in the city. And that’s something that I’m happy about, leaving a positive legacy.”

Gratz High School is the four-time NBA All Star’s alma mater. The school sits on the 1700 block of West Hunting Park and is anchored at the corner of the newly named Rasheed Wallace Road.

The unveiling ceremony was hosted by WDAS radio personality Patty Jackson and the street renaming was spearheaded by City Councilmember Cindy Bass.

Bass also brought a citation from Philadelphia’s City Council on the day of the street sign unveiling.

“It’s official! The 1700 block of Hunting Park Ave. is now Rasheed Wallace Rd. It was my pleasure to introduce the Resolution that made it happen! Congratulations to Philly native, Lakers Asst. Coach and former NBA star who always gives back!”

Earlier in June, Wallace made headlines for agreeing to join the Lakers as their new assistant coach.

When asked about how he feels about the new position. The beloved Philly native simply said “I like it.”

“It’s exhilarating. For the simple fact I get enjoyment out of watching the younger kids play — teaching them a move or two, and then watching them go out there and do it,” said Wallace. “It’s almost sort of like that parent mode. When you see your son or your daughter take the first step and you’re like wooah. It’s great.”

In terms of Wallace’s legacy he shared that his hope is that people will remember “me being the person that I am.”