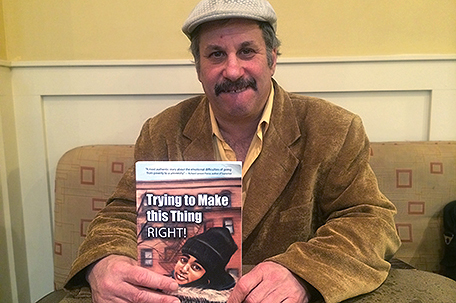 If there was a non-athlete or coach who could give you some insight on the good, the bad and the exploitive of college athletics, Stephen Satell could.

As a tutor for a major college basketball team, he’s seen it up close.

From 1989 to 1992, Satell was a tutor of the University of Massachusetts when John Calipari was the team’s head coach. During that time, Calipari was in the process of turning UMass into an up and coming college basketball program. Unfortunately, the team’s rise to prominence was accompanied by a  stint on NCAA probation due to violations.

Satell’s book, “Trying to Make Things Right,” is a fictionalized account of his time at UMass, the relationships he had with the players he tutored, and his relationship with Calipari, who is now the popular, yet controversial head coach at the University of Kentucky.

The story itself is a compelling coming of age story focused on four central characters– Ka-Shawn, Tutor, Magic and Coach– and the parts they played in the rise of a college basketball program. It’s a story of how the road to hell is paved with good intentions and how much rockier this road can get when ambition trumps all.

The point of the book is to show that everyone benefits when the “scholar” part of the phrase “scholar athlete” is emphasized, said Satell, a doctoral candidate in Temple University’s African American Studies program. If the same things tht make a sucessful athlete, things like teamwork, intensity, comcentration and a knowledge of the fundamentals, are applied to academics, success is a given, he said.

“I want to get people to understand that those things can transform into academic success,” Satell said. “Using the same energy that coaches use to recruit players can also be used to helping bridge the gap between universities and poor communities.”

Satell, who is white, grew up in Philadelphia and lived among African-Americans in some of the city’s toughest neighborhoods. He said he enjoyed his time working with Black athletes and helping them navigate academia in spite of coming from impoverished school districts.

“When you look at urban schools, you look at education that’s mostly set up to fail,” Satell said. “This was a different situation. I happen to have the expertise to make it succeed in an institution where I had the opportunity to do something for a minute where a university can relate to a community.”

“The fiction writer gets inside the character and that was what I thought I had the expertise to do. To relate the different struggles that are personal and universal,” Satell said. “I wanted to bring my experiences into fictional characters.”

During his time at UMass, Satell successfully tutored student-athletes who were admitted to the university under the NCAA’s Proposition 48 because they didn’t have the minimum SAT scores or grades to play right away. Those students aren’t eligible for playing time during their first year of school.

The program maintained an academics-first focus until the Minutemen made their first NCAA Tournament Sweet 16 appearance in 1992, Satell said. Although the team lost that game to the Kentucky Wildcats, it was a taste of success.

After that, Calipari’s priorities changed, Satell said . The “scholar” had been removed from “scholar athlete”and was replaced by an almost maniacal focus on basketball, Satell said.

Oddly enough, Calipari’s UMass and Memphis teams  had to vacate their appearances in the Final Four because of NCAA violations. At Memphis, the school was placed on probation because another student took the SAT in place of star guard Derrick Rose, now a guard for the Chicago Bulls.