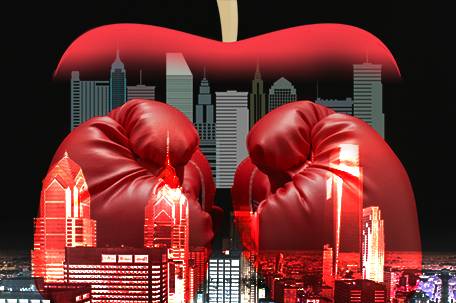 A pair of Philadelphia boxing notables will take the ring this Saturday January 25 on one of the biggest stages in professional entertainment, Madison Square Garden. Super middleweight Jesse Hart (11-0) looks to capture his 10th KO as he is set to take on Derrick Findley (20-11) while heavyweight Bryant Jennings (17-0) will draw contender Arthur Spzilka (16-0) as a part of the Mikey Garcia-Juan Carlos Burgos WBO junior lightweight title fight.

The tandem of unbeaten prizefighters answered questions and worked out in front of a band of reporters last Wednesday during their press conference at Joe Hand Boxing.

“It’s beautiful because it’s in a historical place,” Hart said about the opportunity to fight at MSG.

“The first Ali-Frazier fight was there. All the greats fought there and the past legends. I just think I’m creating my own legacy and my own history as being a part of that.

“Once I fight there I can be a part of the big names in this sport. At one point in time they called it the Mecca of boxing and it’s really just a magical place to be.

As far has his gameplan in between the ropes, Hart announced that he has only one thing on the agenda.

“It isn’t going past three rounds. I got the motivation and the mindset to get him out of there,” Hart said.

“He fought greats such as Andre Ward, Andre Derrell, Curtis Stevenson. He fought top caliber guys, he didn’t beat them, but those guys never knocked him out.”

It would say a lot for the undefeated 24-year old who fought a span of four fights in four consecutive months last year from June through September.  Hart finished 2013 with a record of 6-0 winning all by way of knockout. So it should come as no shock that “Hard Work” Hart is looking to accomplish the same task heading into this bout.

However, there are major differences between Findley and Hart’s prior competition. The matchup is without a doubt his toughest test since joining the pro ranks. The former No. 1 ranked amateur (165 lbs and 178 lbs) has dominated the opposition since his pro debut in spring 2012, but only one of his previous opponents had double-digit win totals. But, Findley, a much more seasoned boxer has 20 wins under his belt and has only been knocked out once.

For Hart, another KO would be his sixth straight and would further polish his USBA rankings where he currently sits in 10th place.

For the softspoken Jennings, he hasn’t seen the ring since last summer when he defeated Andrey Fedesov in a referee technical decision. The one fight was his only appearance since December of 2012. Despite not having seen an opponent in six months, Jennings is confident that he hasn’t lost any steps and that he knows exactly what to expect in his Saturday night matchup

“When you live in the gym there is no such thing as a layoff,” Jennings said

“I know that he’s a southpaw and that he’s a puncher not a boxer. He’s going to have to adjust to me. I don’t have any special tactics. I believe that I’m better at my style than he is at his.

Not quite the knockout ratio of Hart, Jennings style as a fighter wears you down and he gets better as the fight goes on. The 29-year old went widely unknown until 2012 when he went 5-0 including wins over Steve Collins, Siarhei Liakhovich and Chris Coval for a USBA title. Jennings recent success has made him a household name among Philadelphia’s top boxers.

Students of the craft, sparring partners, and most importantly close friends, Jennings and Hart are rooting for each other to go 2-0 in their respective matchups

“We came up together. He became pro shortly after I did and both of us are doing out thing. It’s good to see both of us progressing and doing what we said we were going to do,” Jennings said of Hart.

“He hasn’t been in the (professional) boxing game that long, but his progression is inspiring. I look at him as a big brother and a role model.

“I just think he can do major things in the sport of boxing in the short period of time that he’s been in it,” Hart said of Jennings.