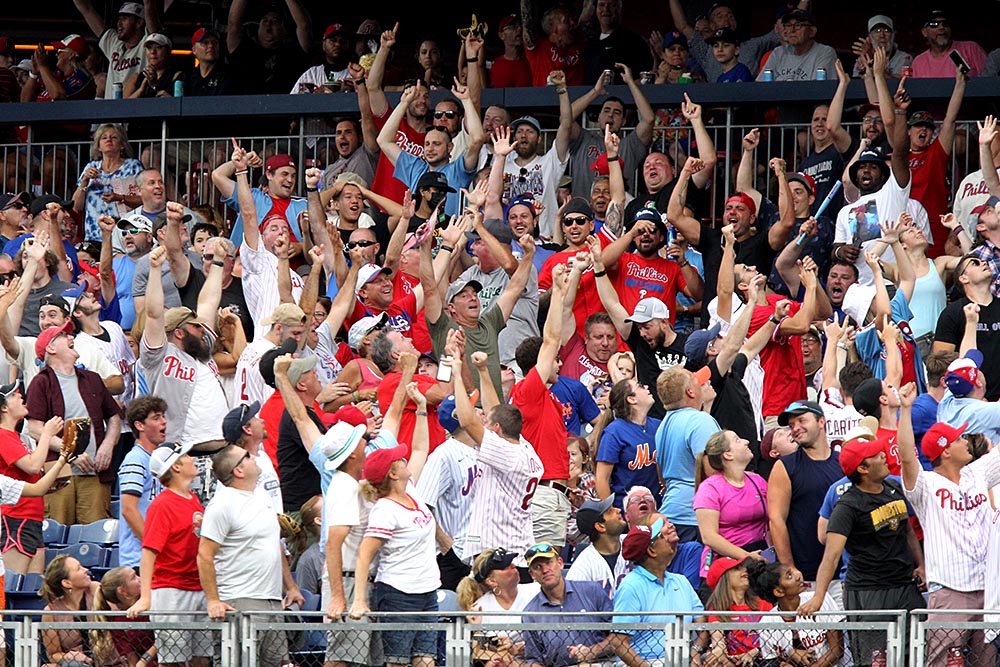 In an example of how things in baseball can change on a dime, the Phillies went from 4 1/4 games behind in the National League East to being on top of the heap.

What a difference a week makes! Since that last loss to Pittsburgh, the Phillies have won eight straight games and overtaken the floundering Mets to take a 2 ½ game lead in the National League East race.

The Phillies tightened their grip on first place by completing a three-game sweep of the Mets with a 3-0 shutout of the Mets in front of 39,186 fans shouting, “sweep, sweep” at Citizen’s Bank Park.

“That’s the thing about this game. You have to stay in it for the long haul,” Phillies manager Joe Girardi said. “You can have bad weeks. We had a couple of bad weeks during the season. But it’s a long season and you just have to keep doing your work … We were pretty down after the first two games in Pittsburgh, and we’ve responded in a really great fashion.”

On a day when the team retired the number of late Hall of Fame pitcher Roy Halladay, Phillies starting pitcher Zack Wheeler put on an electrifying performance in a playoff-like atmosphere against his former Mets teammates. Other than a lead-off double in the first inning and a one-out single in the ninth, Wheeler was simply brilliant, throwing 108 pitches, and striking out 11 batters in a rare complete game shutout.

At one point, Wheeler retired 22 straight batters, something that reminded Girardi of Halliday, whose career with the Phillies included a perfect game and only the second no-hitter in playoff history.

“I would say that’s his best outing of the year,” a visibly emotional Girardi said. “He gave up a double in the first. He got out of it, and he gave up a single in the ninth. On a day that we were honoring one of the greatest pitchers that I’ve witnessed pitch, he goes out and it was like Roy had his hand on it.”

Wheeler was able to keep the struggling Mets hitters off balance with a blistering 90-mile-per-hour-plus fastball. Between the first and the ninth innings, he allowed just one walk and no hits.

“I came with a game-plan wanting to throw more fastballs no matter what team I faced because in my last two starts I kinda got away from it,” Wheeler said during his postgame press conference. “The ball was flying really well today with the right spin today … It plays different when you’re playing the ball and letting it fly like you’re supposed to, and I had the command today of that. My off-speed pitches were pretty sharp.”

Wheeler got a lot of help from the Phillies offense thanks to the home run ball. In the first inning, second baseman Jean Segura and catcher J.T. Realmuto hit solo-home runs.

Outfielder Bryce Harper, as he did in the first game of the series Friday night, helped to put the game away with a solo-home run in the sixth inning, his 20th home run of the season, and he has reached base successfully in 17 straight games.

With the World Series champion Los Angeles Dodgers coming to the city for a three-game series on Tuesday, the Phillies have to keep winning the series from this point forward.

“We’re playing good baseball,” Harper said. “Timely hitting, good pitching. I think you saw that (yesterday). We’re ready to play every day. Not that we weren’t before, but it’s time to go. Win ball games and play well. We got awhile to go, but we gotta stay in it and stay locked in and keep doing things we’re doing the right way.”

Your first place Phillies take the field against the Dodgers at 7:05pm on the NBC Philadelphia Sports Network.