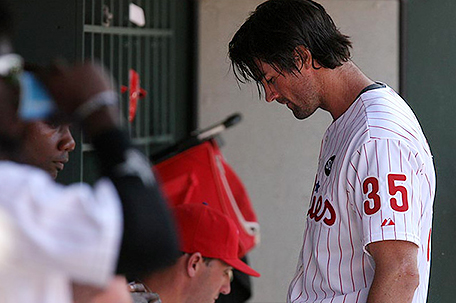 The 2015 season opener for the Phillies was simply a continuation of the seasons since they last won a division title in 2011—a slow start by the starting pitcher and little run support from the offense.

Cole Hamels allowed five hits, four of them solo homeruns—Dustin Pedroia had two of them while centerfielder Mookie Betts and shortstop Hanley Ramirez, who also hit a game-clinching grand-slam home run in the top of the ninth inning off Phillies relief pitcher Jake Diekman.

On a sunny, picture postcard day in front of a sellout crowd at Citizen’s Bank Park, the Boston Red Sox came with a 8-0 shutout of the Phillies.   Well, so much for optimism and hope on opening day. What this game did was reinforce for fans why there will be little to cheer about this season.

“It definitely didn’t go the way we all envisioned,” Hamels told reporters after the game. “I know I’m one of the big culprits of that. You put a team down 1-0 in the first inning, it’s not really setting a good tone or positive message to be able to get the momentum to your side, so that’s a lot of my fault.”

Hamels had five strikeouts and allowed three walks in five innings on the mound. Giving up those homeruns put the Phillies in an early hole and considering how the Phillies offense struggles to score, it might as well be a 40-run deficit.

“Cole didn’t get away with any high fast balls,” said Phillies manager Ryne Sandberg. “His command was not sharp at all and that resulted in the home runs. …No explanation for Cole, he was throwing 94 and he had his fast ball. He seemed to have long counts, they fouled off a lot of balls, they extended at-bats, he threw a lot of pitches and really didn’t into a rhythm of getting ahead of the hitters.”

It took the Phillies offense four innings to get their first hit of the game—a double by Ryan Howard. In the seventh inning, the Phillies actually got two more hits from catcher Carlos Ruiz and right fielder Grady Sizemore.

Ruiz eventually reached third, but was stranded there when shortstop Freddy Galvis struck out to end the inning. That was as close to scoring as the Phillies would get.

Sandberg said his team has to come up with ways to manufacture runs and get timely hits moving forward. For the Phillies, putting hits together and scoring runs will be far easier said than done.

“We’re just going to have to grind out at bats and make the most out of base runners,” Sandberg said. “The games that we played well and won in spring training we would do that and do some other things to advance the runners. We need to hit more and take more walks.”

While Philadelphia sports fans have their usual cynical, pessimistic view of the Phillies lack of hitting prowess, Phillies leftfielder Ben Revere shrugged it off and reminded folks that there are a whole bunch of games left in the season.

“It’s only one game, so it’s 161 to go. We have an off-day and we’ll be back on Wednesday,” Revere said. “It’s a long season. We have to think about Wednesday. We’ll starting getting the groove back, especially with me and (Odubel) Herrerra creating havoc on the bases.”