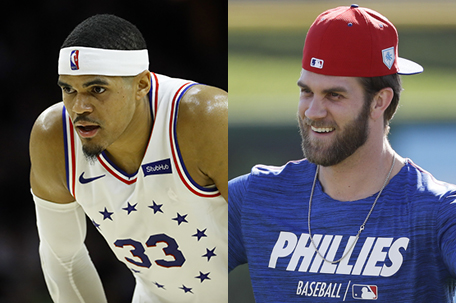 With a series of recent acquisitions, the Phillies and the Sixers have put all of their chips on the table.

Between the Philadelphia Phillies signing outfielder Bryce Harper to a record 13-year, $330 million contract last week and the 76ers making several moves big moves including forward Tobias Harris, the big question among Philly sports fans is which one of these franchises is destined to win a championship trophy first?

While the city is still buzzing over Harper’s s signing with the Phillies, the focus right now is on the 76ers and their playoff fortunes. With 16 games left in the regular season, including a road game Friday night against the Houston Rockets, the Sixers are 41-24 and are in fourth place in the NBA’s Eastern conference and are one behind the Indiana Pacers, who occupy the third spot.

With the acquisition of Harris — who is averaging 21 points per game right now — from the Los Angeles Clippers, the Sixers have arguably one of the best starting lineups in the NBA. Since the trade deadline, the Sixers have won seven out of their last 12 games. That’s not bad at all.

One of those losses came on Feb. 12 to the Boston Celtics, a team that seems to have the Sixers number, with wins in 10 out of their last 12 games. They are currently in fifth place in the Eastern Conference and would play in the Sixers in the first round of the playoffs. The Sixers are trying to avoid that fate by moving up from the fourth spot.

Because of the Sixers formidable starting lineup of Joel Embiid, Jimmy Butler, Ben Simmons, JJ Reddick and Harris, there are some Sixers observers who believe that if they don’t make to Eastern Conference Finals, Sixers head coach Brett Butler’s job might be at stake.

With all the new players have on both their bench and their starting lineup, the Sixers are still trying to develop chemistry on the defensive end of the floor. In some of their losses and in the win, the Sixers have had troubles maintaining leads. The loss to the Bulls Wednesday night was a classic example of that.

The 76ers led by as many as eight in the fourth quarter, but just could not put the Bulls away. Chicago’s Zach LaVine got the winning basket on a layup with under one second left. On the play, LaVine inbounded the ball to Robin Lopez, who passed the ball back to LaVine. Inexplicably, both Jimmy Butler and forward Mike Scott moved to defend Lopez, and that gave LaVine an easy route to the basket for the layup.

That happened because of a lack of communication between Butler and Scott. If the Sixers are going to get to the Eastern Conference finals, they have 16 games left before the playoffs to begin to fix this problem.

Meanwhile, the team that plays in the stadium just across the street from the 76ers-the Phillies- went all out during the offseason by adding proven talent and landing the biggest free agent acquisition. The Phillies’ management, led by general manager Matt Klentak, built a team that is ready to win now.

Harper is a six-time All-Star and former National League MVP. Last season, the 26-year-old slugger hit 34 home runs with 100 RBI. Considering how much the ball flies out of Citizen’s Bank Park, Harper will probably have more than his fair share of home runs and runs batted in this year.

In addition to the above, the Phillies added shortstop Jean Segura, who hit .304 and drove in 63 home runs for the Seattle Mariners.

On paper, the Phillies might have one of the best offenses in baseball.That said, however, the Phillies need to work on their bullpen and their starting pitching needs to more consistent. More importantly, what manager Gabe Kapler now has is a real veteran presence on the team, something he didn’t have in 2018.

The Phillies (80-82, 2018) contended for the National League East and a playoff spot, but were eliminated by mid-August.

A long way from playoff contention, Phillies hope to end season on a winning note