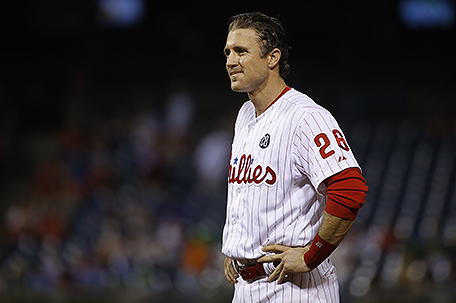 ABOVE PHOTO:  With the Phillies struggling, there is speculation that the Phillies could trade second baseman Chase Utley by the July 31trade deadline.   (AP Photo/Matt Slocum)

Despite rumors to the contrary, Phillies general manager Ruben Amaro Jr. told the Philadelphia media before Tuesday’s game, the team has no interest in trading second baseman Chase Utley.

“First off, no one wants to trade Chase Utley and number two I don’t think Chase Utley wants to go anywhere, and he has the power to decide what he wants to do,” Amaro said. “The point is kind of moot. The same with Jimmy. The same story.”

The website, Rant Sports, recently reported the Yankees were interested in Utley in exchange for some top-rated prospects and a mid-level veteran.

Amaro said those rumors happen all the time because the Phillies (22-26) are not in first place. Utley is currently batting .337 with four home runs and 25 RBI. His contract runs to the end of 2015.

In Monday’s win over the Colorado Rockies, Ryan Howard had a breakout performance with five runs batted in and three hits after batting just .088 in his last 10 games coming into the game and hadn’t hit a home run since May 8.

As much as Phillies manager Ryne Sandberg would like to keep Howard in the lineup just to keep his groove going, he rested Howard Tuesday and replaced him at first base with Darin Ruf in order to give him some time with a lefthanded pitcher on the mound for the Rockies.

“After a big game like that, sometimes it’s a good time to give a guy break, make it a positive and let (Howard) build on that against the right-handed pitching that’s coming up after tonight’s game.”

Sandberg said if Ruf, who bats right, can be productive at hitting left-handers on a consistent basis, he will be open to platooning Howard and Ruf against right and left-handed pitchers.

“If it happens to work, it’s an opportunity to have a lineup like that that produces, it becomes an an opportunity and a possibility going forward just to get some consistency in the offense against right and left-handed pitching,” Sandberg said.

Sandberg may have to at some point. Ruf homered in tonight’s game.

There’s seems to be a belief on the Phillies (22-26) that if they can just somehow put every aspect of their game together on a consistent basis, especially the offense, they can contend for a division title.

“It’s hot, it’s cold, but at some point we can get scalding hot,” Howard said after Monday’s game. “For as hot and cold as we’ve been all year, we’re still not out of it. That’s the bright side of things. If we can get on a good streak, we’ll be right there.”

Franco Not Ready for Prime Time Just Yet 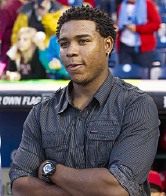 Even with starting third baseman Cody Asche on the 15-day disabled list with a left hamstring strain, Phillies general manager Ruben Amaro Jr. said rising prospect Maikel Franco, who missed a couple of games with a respiratory illness, is not ready to come up from the Triple-A Lehigh High Valley Iron Pigs to the big league ball club just yet.

“Offensively, he’s made some adjustments, he’s made some improvements better than in the earlier part of the season, but he’s not really going on all cylinders now. We’re still contemplating it,” Amaro said. “If he was ready to be in the big leagues, he would be up.”