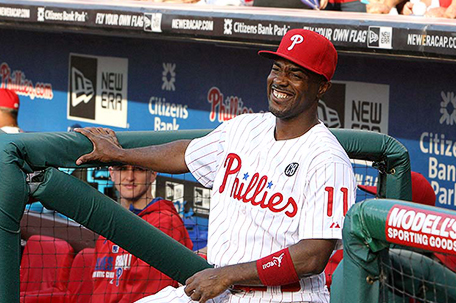 Jimmy Rollins is now a Dodger.

The Philadelphia Phillies traded the team’s all-time hits leader, longtime shortstop—and the current longest tenured athlete in Philadelphia—to the Los Angeles Dodgers on Wednesday. Terms of the deal were not disclosed at press time.

During his 15-year-tenure as a Phillie, Rollins brought the kind of swagger a locker room needs for a championship run. In 2007, he was named the National League’s Most Valuable Player in a season in which he led the league in plate appearances, batted .296, hit 30 home runs, had 94 runs batted in, and made good on his claim that the Phillies were “the team to beat” in the National League.

But it was in 2008, as part of a team that went on to win the World Series, that Rollins had his most permanent impact for the Philadelphia sports fan.

In addition to leaving the team as its hits leader, Rollins also holds the Phillies records for most at-bats and doubles.

Jimmy Rollins wants to stay in Philly, but…