Phillies come back to stun Mets 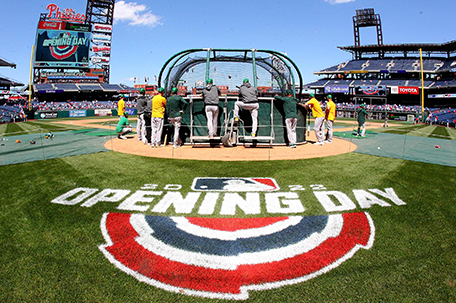 For the first seven innings of their series opener versus the New York Mets, the Philadelphia Phillies couldn’t get anything right.

First, starting pitcher Ranger Suarez, who had a breakthrough season in 2021, couldn’t find the groove he had from last season against the Mets. In the first inning, Suarez gave up three runs on five hits. He left the game in the third inning after laboring through 63 pitches.

After the Mets added a run in the seventh inning to give them a comfortable 4-0 lead, the Phillies were six outs away from their second straight loss.

But just when 22, 317 fans at Citizens Bank Park started counting their team out, the Phillies offense woke up and exploded for five runs in the bottom of the eighth and transformed a certain defeat into a 5-4 win over the stunned Mets, who saw their record go to 3-2.

With fans chanting his name, shortstop Didi Gregorius capped the rally with a double to right center that scored first baseman Rhys Hoskins for the winning run.  Phillies closer Brad Hand got the save and relief pitcher Seranthony Dominquez got the win.

“It was a great come-from-behind win,” said Phillies manager Joe Girardi. “We haven’t swung the bats well in basically two days and somehow Alec (Bohm) walks and we get a little flair and that leads to a lot of good things. Big hit from J.T. (Realmuto) Nick Castellanos works a big walk, Rhys (Hoskins) hits a double, he scores and then Didi gets a big hit.”

“I felt like I had to come through for the team.” Gregorius said as he heard the fans chant his name. “But it was good. That’s what we need for everybody. We need that extra boost that we need to keep things going in the right direction for the team.”

In that dramatic eighth inning, the Phillies much-maligned third baseman Alec Bohm started the rally with a walk. On a day when he committed three errors at the Hot Corner, Bohm fought through it and more than made up for his mistakes.

“Everybody in here’s got my back and I’m just glad I got teammates that picked me up there to make up for my mistakes,” Bohm said.

Girardi said Bohm’s errors in the field were a result of him trying to do too much. He liked the way Bohm contributed to the team’s win despite his mistakes in the field.

“(Bohm) responded. He turned a couple of double plays, he got on base three times,” Girardi said. “Proud of his at-bats, the progress he has made offensively. He was a big part of our offense tonight. He’s growing up a little bit, but he’s got to do some more.”

After sending out a tweet  in which reportedly he said, “I hate this f—place, Bohm said the emotions of making those errors got to him.

“It was a frustrating night for me. These fans, they just want to win …I didn’t mean that,” Bohm told reporters after the game.

After his walk, Bohm ended up third with a single by pinch hitter Johan Camargo. Bohm would score on a fielder’s choice by leftfielder Kyle Schwarber.  Catcher Realmuto drew the Phillies even closer with a two-run home run that put the Phillies within one run of the Mets, 4-3.

An RBI-double by Hoskins that scored Castellanos tied the game. Another double by Gregorius put the Phillies ahead for good.

“It was a lot of fun,” Castellanos said. “That was a Phillies win for sure. Everybody contributed. Everybody was in the game… Even in the dugout when we were down, we’re like yo’ we’re winning this game.”