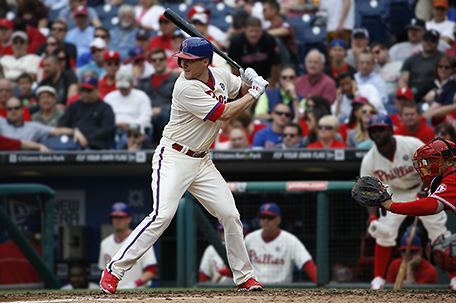 ABOVE PHOTO:  Cody Asche has been swinging a hot bat for the Phillies.  (AP Photo)

Phillies manager Ryne Sandberg has been saying all season that he wanted to see his team to score early in the game, the middle and late.

In Sunday’s 8-3 win over the Cincinnati Reds at Citizen’s Bank, the Phillies did just that and they did it with the long-ball while getting a solid pitching performance from starter Cliff Lee (4-4, 3.18). The game was a showcase of the team’s offensive potential if they can do it on a consistent basis.

“I think you just saw in the last two days what can happen when we all put together all three phases of the game— pitching, defense and our offense,” said third baseman Cody Asche, whose three-run homer in the seventh sealed the Phillies win. “We’ve been missing a piece or two here or there in a couple games and dropped a couple of tough ones. I think you saw the potential of the team not just our offense.”

Lee wasn’t his usual dominating self, but he was tough enough to keep the Reds off the board after they scored two in the first inning. For the game, he allowed just two runs on nine hits with three strikeouts with just one walk.

“Cliff Lee, with his 116 pitches, got off to a bit of a slow start in the first inning with his velocity, but picked it up and it was solved,” Sandberg said. “He competed out there and he mixed his pitches well.”

Just as important as his effort on the mound, Lee got some run support from the Phillies offense, especially in the Phillies half of the first inning when they got back-to-back home runs from lead-off hitter Jimmy Rollins and catcher Wil Nieves.

Nieves said answering the Reds in their half of the first inning with home runs was a huge boost in momentum for a team that has struggle to hit at times throughout the year.

“We got the talent. It’s happy to see all of the guys getting hot at the same time,” Nieves said. “Hitting is contagious. … I know we’re a team capable of doing this day in and day. Us coming back from two runs down was just huge and Cliff Lee kept them there until we busted it open late in the game. It was huge.”

The Phillies took the lead for good in the fifth inning on an RBI ground out to first by second baseman Chase Utley that scored Lee, who singled to lead off the inning. The Phillies got a solo homer from right fielder Marlon Byrd in the sixth.

In the seventh inning, the Phillies put the game away for good on an RBI single by Byrd and Asche’s three-run homer. It was his fourth of the season. During the month of May, Asche is batting .333 with a .418 on-base percentage and has a .625 slugging percentage.

“I’m swinging at more strikes I would say,” Asche said. “The more strikes you swing at, the more chances you’re going to have to put the ball in play hard. You have to be more precise in what you’re looking and go from there.”