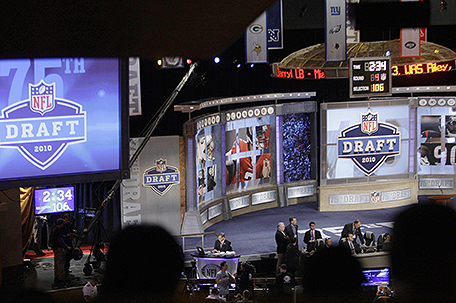 Okay, suppose you’re the general manager of the Philadelphia Eagles and you have the eighth overall pick in the NFL Draft?

Who do you pick?

If you said someone like North Dakota State quarterback Carson Wentz or former University of California signal caller Jarrod Goff, you’d be good.

And since the Eagles made a blockbuster trade to move up in the draft, it’s totally possible.

The Eagles had traded out of the 13th pick in the first round before taking the big leap. But you can’t get a big reward unless you take a big risk, said Howie Roseman, the Eagles executive vice president of football operations.

“The bigger risk is that you force a position and you don’t get a guy who makes a difference when you’re picking that high,” he said. “From our perspective, it would be a more of an indictment on that process if we weren’t able to get someone who made a difference.”

If you believe that the Eagles need a solid left tackle because an aging Jason Peters has been battling injuries, you’d have a sound argument. But even if the Eagles don’t take an offensive tackle with the first pick, there are plenty of players in the third, fifth or sixth round that could help the team, said Doug Pederson, the Eagles new head coach.

“With offensive lineman, you can’t have enough of them,” Pederson said. “Your starters are your first, second and third round guys. Later in the third, fourth and fifth, you got guys who can develop. I feel like that this is a deep draft at tackle to pull one of those guys and develop him.”

Perhaps, you’re thinking the Birds could use a running back that can break off 50-yard runs on a regular basis. If that’s you, the prospect of the Eagles drafting running back Ezekiel Elliot has you salivating.

The star running back from The Ohio State University can not only run, but can also catch the ball in the backfield, something that any good West Coast offense needs.

“(Elliot) can do it all, he can catch the ball, he can pass-protect,” Roseman said. “They use him as a lead-blocker. He’s a winner. … Someone told me a long time ago, your running back sets the tone for your identity. Certainly, he did that at Ohio State. … He’s a difference maker.”

If Elliot happens to be available by the time it’s the Eagles turn, they need to take him because the team needs a strong running to take the pressure off of the quarterback, whether it’s Sam Bradford or someone else.

The Eagles defense could definitely use a shutdown corner, but it’s highly unlikely that they would draft a corner in the first round. Since they don’t have a second-round pick, they may find one in the third round.

Alexander runs a 4.4 40-yard dash and was so good during his final year at Clemson teams didn’t dare to throw the ball to his side. He was considered of the nation’s best cover corners.

If you’re a Temple fan and you saw the American Athletic Conference championship game, you saw Jackson stymie the Owls air attack with seven pass deflections. He also had five interceptions and 23 pass break-ups.

Whatever happens during next week’s draft, it’s important for the Eagles to make a big splash in this draft to reassure fans that they’re going in the right direction.

Otherwise, it’s going to be a long year.

A look at the Eagles post draft–a better season, better team ahead?