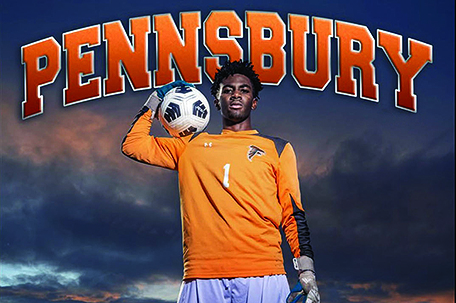 Justin I. Brown, a senior at Pennsbury High School in Fairless Hills, Pa. was selected to the First Team All-League as a goalkeeper in the Suburban One League of the PIAA District 1 Boys Varsity Soccer league.

Justin was selected among 24 other teams in their league.

As the senior lead captain of his Pennsbury Falcons soccer team, Justin led his team to the 2nd round of the PIAA District 1 4A Boys playoffs with two shutouts halves of each game.

Justin’s proud and loving parents, Jim Brown and Gwen Washington, are supportive of Justin’s interest in soccer and what his hard work has allowed him to accomplish.

They hope that other parents would also support, encourage and empower their own kids’ dreams to be the best young person they can be and to enjoy the sports they love.

When asked what advice he would give to other kids when it comes to following their own dreams, Justin answered, “I would say, just to stay consistent and persistent in their sport. Listen to your coaches and work hard in practice.”