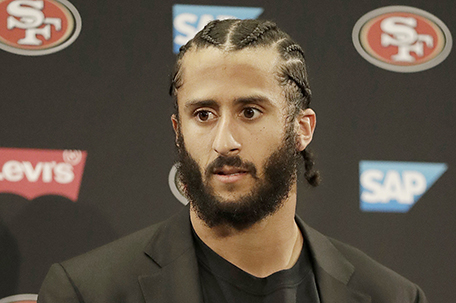 While his collusion suit against the NFL has been settled, the impact of Colin Kaepernick’s protests against police brutality is still being felt.

Since hearing about the settlement of Colin Kaepernick and Eric Reid’s collusion case against the NFL, I have been contemplating how to look at Kaepernick’s protest of police brutality by taking a knee during the national anthem from a purely historic and philosophical point of view.

News of the settlement came in the midst of a lesson that I was teaching my English composition students at Bowie State University, a Historically Black College based in Bowie, Maryland. The lesson centered on the 1971 fight between Muhammad Ali and Joe Frazier and how that fight divided the country along racial and political lines.

During my lecture, I talked about how both Kaepernick and Ali were willing to sacrifice their careers for their beliefs in the concept of justice.  Ali had his world heavyweight title, as well as livelihood, stripped from him because he refused to participate in an unjust war in Vietnam because of his religious beliefs and because Black people were denied freedom in this country.

“My conscious won’t let me shoot my brother or some darker people or some hungry people in the mud for powerful America and shoot them for what?,” Ali said back in 1967. “They never called me ni**er, they never lynched me, they didn’t put no dogs on me, they didn’t rob me of my nationality, they didn’t rape my mother or kill my father … How can I shoot them poor people. Take me to jail.”

At the time, Ali’s detractors thought he was unpatriotic and a traitor to the nation for his principled stand. In 2005, Muhammad Ali was honored with the Presidential Medal of Freedom for that same principled stand. President George W. Bush called him, “a fierce fighter and a man of peace.”

Some 50 years later, Kaepernick refused to stand for the national anthem and took a knee to protest police brutality and racial injustice.  Like Ali, Kaepernick’s job was taken from him, but in a more insidious way through a back door agreement by team owners.  Despite all denials to the contrary, teams refused to sign Kaepernick while quarterbacks of lesser talent got jobs as both backups and starters.

I believe that it was collusion, because there was a confidentiality agreement in the settlement, and because if Commissioner Roger Goodell and the owners thought they were really right about the NFL owners not hiring the former Nevada star, they wouldn’t have agreed to give Kaepernick anything. It has been widely speculated that Kaepernick stands to receive somewhere between $60 million to $80 million, the equivalent of a three to five-year contract for a quarterback with his abilities.

But as I have always said, if Kaepernick never plays another down in the NFL, his legacy is assured as an athlete who used his platform to point out injustice: “I am not going to stand up to show pride in a flag for a country that oppresses Black people and people of color, he said.”

I think that both Ali and Kaepernick’s acts of defiance against injustice were patriotic in standing up for the principles of freedom and justice that the country was founded on 1776 when Thomas Jefferson penned the Declaration of Independence.

That’s Kaepernick’s legacy as a freedom fighter. In taking a knee, Kaepernick was really standing up to make sure that the U.S. Constitution and the lofty ideals of the Declaration of Independence are extended to people of color.

For some reason, patriotism has often meant blind loyalty to the country or this notion of “My country, right or wrong or “America: Love it or Leave it.” That has always been the interpretation of right-wing Republicans who conflate patriotism with nationalism.

Hopefully, the sacrifice Kaepernick made will show all of us what patriotism actually looks like.

It’s a reminder we could certainly use.