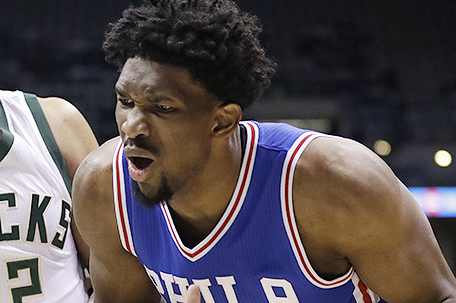 Joel Embiid doesn’t know if he will feel better.

He certainly knows he has to play better.

He’s battling an illness, looking like someone who’d rather be in bed than on the court. But the Philadelphia 76ers need their All-Star center, so Embiid is trying to tell himself that he has to dig deeper to find more energy, even if it’s only for three hours.

“You know, can’t control my physical condition, but I can also control how much I push myself and I try to do that,” Embiid said. “But I’ve just got to do more.”

If he can’t, he’ll have all the time he needs to rest.

With Embiid faltering, the 76ers try to fight off elimination and send the Eastern Conference semifinals back to Toronto when they host the Raptors for Game 6 on Thursday.

Portland will also try to send a series the distance on Thursday, hosting Game 6 against Denver, which has won two straight for a 3-2 lead behind Nikola Jokic, its dominant center.

Embiid is supposed to be a dominant center, too.

But he hasn’t performed at anywhere near that level since Game 3, when he had 33 points, 10 rebounds and five blocks as the 76ers romped to a 21-point victory and a 2-1 lead. He’s been unable to find that level again while missing valuable court time because of his illness, managing just 11 in Game 4 and then 13 points and eight turnovers in the Raptors’ 125-89 rout on Tuesday.

The 76ers used to be able to wait out Embiid’s woes. His foot injuries delayed the start of his career by two seasons, but that was back in Philadelphia’s “Process” era when planning for the future superseded playing for the present.

They need him now against the second-seeded Raptors and the red-hot Kawhi Leonard, especially because fellow All-Star Ben Simmons is struggling, too. But it’s Embiid taking the bulk of the beating from fans and media, and coach Brett Brown doesn’t think that’s right.

“I think it’s grossly unfair, some of the criticism that he gets. I don’t understand that,” Brown said. “And so it’s not ideal, you wished he were at shootaround, you wished he were in film sessions, but he had a temperature for the last few days that’s kept him in bed.”

Embiid isn’t giving up yet. He told rapper and Raptors fan Drake he would see him back in Toronto for Game 7, and knows what he needs to do.