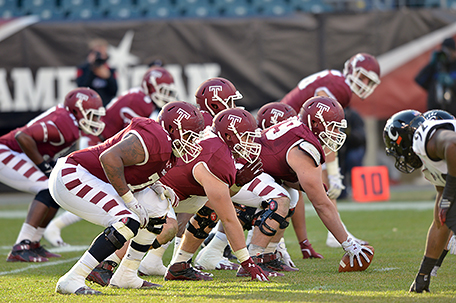 The only team with a winning record in the City of Philadelphia right now is Temple Owls football squad. If that doesn’t tell you how muddy the city’s sports landscape is right now, nothing will.

To say that this has been an awful year for Philadelphia’s professional sports teams would be an understatement.

The Phillies spent the entire Major League Baseball season in the National League East’s basement. The Flyers didn’t make the National Hockey League playoffs. We’re not even going to talk about the 76ers and the fact that they haven’t won a game yet this season.

Even the Philadelphia Eagles, the team that most sports fans have traditionally seen as the ray of light in the Professional Sports darkness here in Philadelphia, are giving fans fits. At the beginning of the year, these fans had visions of Super Bowl 50 dancing in their heads.

Now, nothing would make them happier than hearing the news that head coach Chip Kelly is heading back to the college ranks. Especially after the debacle that was last Sunday’s 45-17 loss to the Tampa Bay Buccaneers. The Eagles defense, the team’s lone bright spot, became part of rookie quarterback Jameis Winston’s highlight reel as he threw for five touchdown passes.

Right now, the only thing standing between Philly’s sports fans and collectively jumping off the Ben Franklin and/or Walt Whitman bridges is the Temple University Owls’ football team.

No, you read that right. The college football team that set the record for consecutive losses is the only team holding it’s own right now.

In a year when fans in the City of Brotherly Love have had little to cheer about, the Owls have been the best team in the city and the best FBS college football team in the state.  This weekend, Temple (9-2, 6-1) will be playing for the American Athletic Conference’s Eastern Division title when they take on the Connecticut Huskies (6-5, 4-3) Saturday night at Lincoln Financial Field.

If the Owls win, they will take on the winner of the Navy-Houston game in the AAC Championship game. At the beginning of this season, no one would have thought Temple would be the best team playing at Lincoln Financial Field season.

No matter what happens on Saturday night, the 2015 season has been special for Temple and for the city because they’ve given normally cynical, angry fans something to cheer about in a bad year for Philly sports teams.

When the team upset Penn State in front of a packed house at Lincoln Financial Field, you had the sense that this was going to be a different season for Temple football. The team won it’s first seven games, and came within a play or two from upsetting sixth-ranked Notre Dame, another sell-out game that led to a visit from ESPN’s College GameDay and turned the City of Brotherly Love into the nation’s largest college town.

Led by head coach Matt Rhule, a guy who doesn’t come off as one of those college football coaches who cares more about his ego than his team’s success, the team has played with passion. You can’t coach football or any team for that matter in this city without wearing your emotions on your sleeve, and Rhule appears to understand that.

Temple quarterback P.J. Walker is currently the best quarterback playing at Lincoln Financial Field. He’s thrown 17 touchdown passes, only six interceptions, and has passed for 2,209 yards.  He has the ability to make plays in the pocket and to extend plays with his feet.

Senior linebacker Tyler Matakevich, who was recently nominated for the Bednarik Award as the nation’s best defensive player, has been the Owls enforcer in the middle.  He leads the team in tackles (107, 65 solo). Matakevich was tailor-made to be a linebacker for a Philly football team. He’s tough, gritty and takes a blue-collar approach to the game making him a player former Eagles great Chuck Bednarik would appreciate.

Even if the Owls lose to UConn on Saturday or lose in the AAC Championship game, it’s still been a great ride and they’ll still go to a nationally televised bowl game.

The Owls have made Philadelphia a college football town again… which considering how the pros are playing, didn’t take a lot…