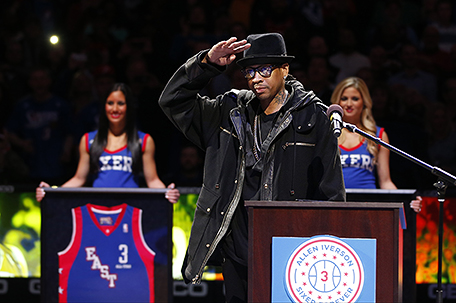 ABOVE PHOTO:  Former Philadelphia 76er Allen Iverson speaks during his retirement ceremony at halftime of an NBA basketball game between the Philadelphia 76ers and the Washington Wizards, Saturday, March 1, 2014, in Philadelphia.  (AP Photo/Matt Slocum)

As they raised the banner with his No. 3 jersey above the rafters at the Wells Fargo Center, Allen Iverson looked up in amazement as the crowd roared its approval with some chanting MVP.

It was one last good-bye and one final cheer from the crowd for the 39-year-old Iverson, who wearing a Black fedora, some chains around his neck and some studious-looking glasses. He put his hand to his ear to really feel and hear the energy of the crowd one more time.

After the ceremonies ended, Iverson said hearing that crowd cheer for him was a bittersweet occasion because he knows it may be the last time he gets to hear the roar of the crowd again until he is eventually inducted in the Basketball Hall of Fame in Springfield, Mass.

“It feels good, but you know in some part of my heart, it hurts,” said Iverson, who won four NBA scoring titles and two All-Star Game MVP Awards. “I realize and I understand that it’s over. When I come into the arena, I’m stepping onto the basketball court with street clothes on and I know it will never be in a uniform again.

“That part of it brings back so many memories just hearing the roar of the crowd, doing my signature put my hands up to my ears.  It brings it back, but it hurts still. I’m a basketball fan, it’s hard for me to watch the Sixers play. … It feels like just yesterday I was here trying to entertain these fans.”

The Philadelphia 76ers organization retired Iverson’s number during halftime ceremonies of the Sixers game versus the Washington Wizards.  To keep it real, those who witnessed Iverson’s jersey being raised above the rafters to go along side the likes of Julius Erving, Maurice Cheeks and Wilt Chamberlain will probably not remember the outcome of the game itself.

That’s because they came to celebrate a player in Iverson who was perhaps the embodiment of what means to be an athlete in a broad-shouldered city like Philadelphia. If there was a Mount Rushmore of gritty, tough athletes in this town, you’d have to carve out a statue of Iverson.

Philly fans will never forget Iverson leading the Sixers run to the 2001 NBA Finals. The 6-foot former Georgetown star was brilliant in the Eastern Conference semifinal and finals. Fans will never forget the fourth quarter of the Sixers Game 1 win over the Los Angeles Lakers and the three-pointer he hit while stepping over Tyronn Lue.

“The best one was in Toronto when Vince (Carter) got 50 and the next game Allen goes back and gets 50. You don’t see that in a playoff series,” said former Sixers general manager Billy King. “It was games like that … beating Milwaukee, winning the first game in LA. The whole year was magical. (Iverson) getting MVP of the All-Star game, I was blessed to be a part of it and to have a front-row seat.”

During the course of the evening, Iverson was showered with affection from all-time great Sixers like Erving and his former head coach Larry Brown, who appeared on the Wells Fargo jumbotron, congratulated Iverson for having his jersey retired.

There were video accolades from current players like Carmelo Anthony, LeBron James, Ray Allen and Chris Paul who paid tribute to Iverson and thanked him for being an influence on them as players.

Some of the players Iverson played against were also in attendance. One of them was former Seattle Supersonics guard Gary Payton. Known as the “Glove” for his defensive prowess, Payton said Iverson was difficult to defend.

“He was always a nightmare to guard because you knew he was going to score,” Payton said. “He could get to the basket and hit jump shots. You just had to contain him and hope he had an off night.”

Iverson was also an iconic figure to the mid to late 1990s hip-hip generation. His braided hair, jewelry and tattoos gave a voice to a generation of young fans that the world would prefer not to see or hear. Iverson brought street swag to the NBA like no other player before him.

Iverson, who won the NBA’s MVP award in 2001, said he took a lot of criticism from the media for the way he looked, the way he dressed, the friends he hung with and his attitude. If he had to do it all over again, he would still do it his way.

“I enabled this generation now and took the beating, so they can express themselves and be who they are,” Iverson said. “It’s a bittersweet situation, but I wouldn’t change it for nothing else.”