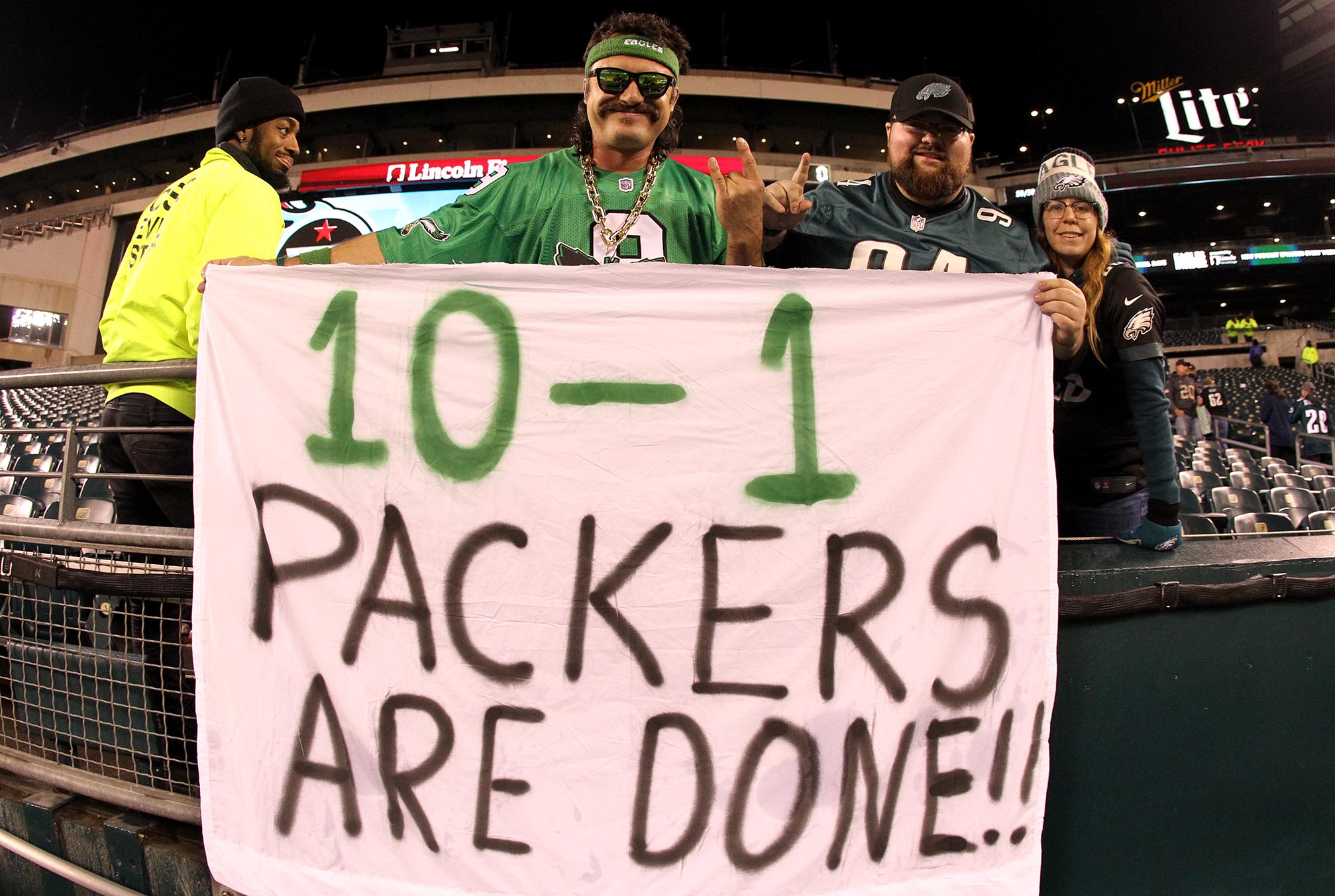 Philadelphia Eagles quarterback Jalen Hurts set a team record in Sunday night’s win over the Green Bay Packers. But it wasn’t with his arm.

Thanks to a porous Packers run defense that had been yielding 4.6 yards per carry before it came into Lincoln Financial Field Sunday night, the Eagles adopted the “three yards and a cloud of dust” ethos of Archie Griffin’s Ohio State Buckeyes en route to a 40-33 win.

The Eagles’ ground game roughed up the Packers’ defense for the final team 363 yards, 157 of which belonged to Eagles quarterback Jalen Hurts. In addition to gashing the Packers with runs of 42 and 24 yards, he kept the defense off balance in the passing game by completing 16-of-28 passes for 153 yards and two touchdown passes.

And, as if the rest of the league didn’t know this already, Hurts’s performance showed that the Eagles, at least offensively, have several ways to beat you, wide receiver A.J. Brown said.

“It just shows that we’re versatile,” he said. “We did a really good job of just spreading the ball around and Jalen took it upon himself where he saw opportunities to create plays with his legs. He did that all night.”

Hurts is the third quarterback in NFL history to post those kinds of numbers joining Baltimore Ravens quarterback Lamar Jackson (236 passing, 152 rushing against the Cincinnati Bengals in 2019) and former Eagles quarterback Michael Vick, who had 173 rushing and 173 passing yards against the Minnesota Vikings in 2002 when was with the Atlanta Falcons.

Hurts said he was honored to be mentioned in the same breath as the likes of Vick and former Eagles greats such as Donovan McNabb.

For the game, Hurts accounted for 310 of the Eagles’ 500 total yards on offense. One of the beneficiaries of Hurts’ solid performance was running back Miles Sanders, who gained a career-high 143 yards with two rushing touchdowns.

When Hurts is making defenses account for both his arm and his legs, the rest of the Eagles backfield benefits, Sanders said.

“When we run our inside zones, you got linebackers and defensive ends guessing because you don’t know if we’re going run up the middle to get five or 10 or you don’t know if (Hurts) is going to pull it and get about 20,” Sanders said after the game. “It puts the defense in not a good spot, but it helps us a lot.”

“Yeah, I think that’s big because it forces the defense to have to take one of their coverage guys and account for Jalen with it, right, or know where Jalen is at least, right?”  Sirianni said. “So, you give a little, you get a little, right? If I need to put another guy to make sure Jalen isn’t getting loose, then that’s one less guy in coverage. If I have to tell the defensive line not to rush a certain way because Jalen can be able to break out, then typically on that you’re telling them don’t just jet up the field because this guy is going to get through the line of scrimmage and make a play.”

And no one felt the presence of Hurts’ ability to use both his arm and legs than Green Bay Packers head coach Matt LaFleur.

“He did a lot of things that’s tough to account for,” LaFleur said. “He’s a hell of a competitor and he’s extremely talented. You saw it not only obviously on the ground. That’s one thing but there’s some remarkable throws as well.”

The Eagles are now 10-1, have the best record in the NFL, and are on their way to home field advantage in the playoffs. The team heads to Nashville to take on the Tennessee Titans on Sunday, December 4. You can catch that game on Fox-29 at 1 p.m..