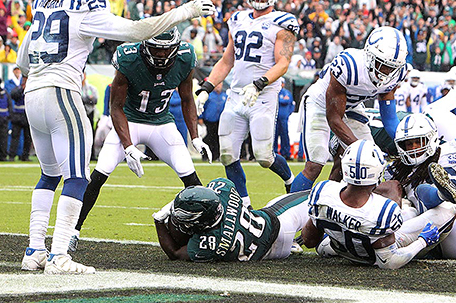 In four out of their last six games including Super Bowl LII, the Eagles defense has needed to stop a team invading their end zone late in the game. In three of those games, the Birds have had to stop teams inside the red zone with time running out.

In Sunday’s 20-16 win over the Indianapolis Colts at Lincoln Financial Field, the Eagles red-zone defense was the difference maker in a game where the Birds offense struggled with consistency despite the return of starting quarterback Carson Wentz.

The Colts offense, led by quarterback Andrew Luck, had the ball in the Eagles’ red zone three times and only had six points — two field goals — to show for it. On two occasions, the Eagles offense committed turnovers deep in their territory, but the defense refused to yield a touchdown.

“We went out there embracing it other than complaining about it,” said Eagles defensive end Brandon Graham. “Now, we gotta do something about it. We control what we can control at that time and that’s getting a stop and making sure they don’t score or letting them score three points, not a touchdown.”

“I think the biggest thing is when we have our backs to the wall, that’s when we really rise to the occasion,” defensive tackle Fletcher Cox added. “I think always that this defense wants to be the reason why we win.”

Eagles safety Malcolm Jenkins said his defense teammates have become comfortable with being in those situations when teams move the ball into their red zone. It’s something they work on in practice by working on communication and understanding different coverages.

“We know that if we can keep teams out of the end zone, what happens between the 10-yard lines is irrelevant,” Jenkins said. “Once we get down there tight and we can hold them to three, we feel like we can outscore anybody.”

After the Eagles had taken 20-16 lead on a four-yard run, Wendell Smallwood, with 3:06 left in the game, Luck and the Colts drove to the Eagles four-yard-line but did not score. On fourth down, Derek Barnett sacked Luck at the Eagles 20-yard to clinch the win for the Eagles.

“We just wanted to collapse the pocket and put as much pressure on Luck as much as possible because we know he’s a good quarterback. He’s tall and can see over the pocket,” Barnett said after the game.

Not only did the Eagles shut down the Colts in the red zone, they also won the statistical battle. The Eagles defense held Indianapolis to just 209 yards of total offense including 68 yards rushing. The Colts were just 2-of-12 on third down conversions. They sacked Luck two times.

“Offensively, seeing our defense just continuously stepping up late in the game, like they have going back to last year, the first game of the season and then (Sunday, gives us a lot of excitement on the offensive side, just knowing that if we can put one together, the defense is going to get a hold and that’s what they did,” Wentz said.

In his return to the Eagles lineup, Wentz completed 25-of-37 passes for 255 yards with one touchdown pass, one interception and one fumble. He was sacked five times.