On the basketball court, Taylor Brown has become a 7th grade phenomenon 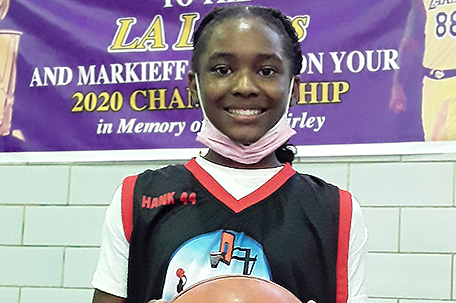 It is sometimes said that good things come in small packages.

In the case of 13-year-old Taylor Brown, the speedy, petite, and super talented point guard is an incredible basketball player. Despite her small size, Brown has taken local youth basketball by storm. And judging by today’s standards, she could be considered a 7th grade phenomenon.

Around the city, Brown is known for destroying the opponent’s defense — she has done it many times. As she keeps getting better and better on the court, Brown’s basketball skills have been flying off the charts.

Before she turned 13, Brown was playing in an adult women’s basketball league run by Kenyatta McKinney, who started the league after the pandemic wiped out basketball activities around the city. The league gave older female players a chance to display their basketball skills. Even though Brown was the youngest player in the women’s league, that didn’t intimidate or discourage her from playing basketball against older women. Instead of being afraid, Brown loved the challenge; it gave her a chance to show off her basketball skills.

While she played basketball for the Lynx team, Brown became one of the top scorers in the Elite 8 Women’s League. During the season, she averaged more than 15 points a game and was named Elite 8 “Rookie of the Year.”

While playing with the Elite 8 at Hank Gathers Recreation Center in North Philadelphia, Taylor Brown helped her team win a basketball title.

In addition to playing in the Elite 8 Women Basketball League, Brown also plays AAU Basketball for the New Jersey Sparks. The Patterson-based basketball team has dominated middle school basketball in the Garden State area. The New Jersey Sparks have won several winter league championships and recently, captured the American East Division Championship. They have also taken home three championships in the Girls Winter League in Neptune, New Jersey. The league features some of the top rising talent from New Jersey and Brown is one of them.

About two weeks ago, the New Jersey Sparks traveled to Kentucky for a basketball tournament. In their first game, Brown scored 19 points and took off with 6 steals. The middle school basketball star helped lead the New Jersey Sparks to a 63-62 victory over Knights Academy, a team from Missouri. When she was done playing basketball in Kentucky, Brown returned to Philadelphia, where she plays for the Philadelphia Black Hawks.

On June 22, Brown knocked down a 3-point buzzer beater as she helped the Black Hawks defeat the Hunting Park Warriors by a score of 41-38. The whole team celebrated, as she was the top scorer in the game. Brown finished the game with 24 points.

What made her shot so dramatic was that both of her parents were at that game. Her father, Al Brown — a former head basketball coach at Lincoln High School — watched her hit the game’s winning jumper.

Back in 2018, Roman Catholic defeated Lincoln High, 92-80, for the PIAA Class 6A state title. After that championship game, Al Brown left the Lincoln High basketball program and dedicated his time to help his daughter with her basketball career. Due to his hard work, Taylor Brown has become an outstanding basketball star.

“Even though my dad has helped me with my basketball career, it has been my mom who has been the hardest on me,” Taylor said. “If I don’t play good defense, my mom will be really hard on me. She has been my biggest critic and supporter.”

Before Brown is done playing basketball, she will shatter many scoring records, bruise a number of egos and raise the country’s consciousness. Today, the young baller has enough basketball talent to go straight to the WNBA; she hopes to receive a four-year scholarship to play basketball for a Division I college.

“My goal is to get a free four-year scholarship to a Division I college and go to medical school to become a doctor,” she said. “That’s what I want to do in my basketball career. Meantime, I will keep working hard on the basketball court and stay fearless in my games.”

Fans can catch Taylor Brown’s next game on July 20 at Belfield Recreation Center, located at 2100 W. Chew Avenue. Brown will start at point guard for the Philadelphia Black Hawks. The Black Hawks will battle the Hunting Park Warriors. The game will tip off at 6:00p.m. sharp.