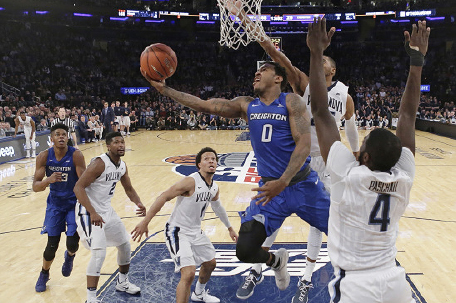 The Villanova University Wildcats are about to start dancing in the NCAA Tournament.  But will they take the Final Four trophy home with them again?

The last time we saw the Villanova Wildcats in the NCAA Tournament, there was confetti and wild celebration after Kris Jenkins’ dramatic three-point buzzer beater brought the Wildcats its first national championship since 1985.

After last year’s heroics, Villanova is looking to become the third team since the UCLA’s Dynasty years of 1967-1973 to win back-to-back NCAA Tournament titles. The Florida Gators were the last team to repeat as national champions (2006-2007).

Head coach Jay Wright’s Wildcats come into the tournament as the No. 1 overall seed. That means the Wildcats have the proverbial target on their backs. Considering the road they have to travel to return to the Final Four, the whole target thing is more than just an overused cliché in this case.

Last season, the issue was about merely surviving the first weekend. This year, the question is, can they win it all again?

“And this year, it is about repeating. You’re a one seed, and so you’re supposed to win it if you’re the one seed, right?,” Wright said during the team’s press conference in Buffalo, the site of their opening round games. “It’s all about how you handle that, and I think having that pressure last year and having pressure this year, I think makes it a little bit easier to handle.”

Barring an upset of biblical proportions, Villanova should have gotten past a scrappy No. 16 seed in Mount St. Mary’s (Md.) by the time you read this because, well, no 16 seed has ever beaten a No. 1 seed.  No matter who the Wildcats meet in Saturday’s Third Round, they’re going to face a tough opponent. Whether it’s a Virginia Tech, a team that likes to go and down the court and hit threes or a tough defensive-minded Wisconsin squad, Villanova is not going to have an easy road.

If the Wildcats the tumultuous road of the first weekend, there are possible Sweet 16 matchups with teams like Virginia, who they beat in a close game during the regular season and Florida. Should Nova get to the regional final, No. 2 seed Duke and/or No. 3 seed Baylor await them.

But the Wildcats have enough fire power and experience to play against the nation’s best teams. If they proved anything from beating teams like Kansas, Oklahoma and North Carolina in last year’s tournament, they’re not going to go out without a fight. The fact that they are the top team in this year’s Big Dance is proof-positive of that.

Villanova is led by senior and Play-of-the Year candidate Josh Hart, who is averaging 18.9 points per game and is shooting 40 percent from three-point range.  At the point guard spot, Jalen Brunson, whose father Rick was a standout playmaking guard at Temple, has picked up where his predecessor Ryan Arcidiacano left off.

Brunson is the Wildcats second-leading scorer, averaging 14.8 while dishing out 4.2 assists per game. One of his best performances came in a win over Seton Hall, he scored 22 points and had 10 assists. He’s the guy who runs the Villanova offense.

The biggest thing for the Wildcats players is can they handle the onslaught of another tough run to the NCAA Tournament.  Hart said there’s no time for savoring the moment of being able to defend their title with teams gunning to take their crown.

“It’s hard to do it now because we have questions about repeating. So, you know, you can’t really embrace it too much,” Hart said.  “Obviously, it’s a blessing being able to be here, this isn’t a privilege. But that’s why we got to just rely on each other and focus on each other, and don’t focus on anything else.”