Not Falling For The Okey Doke 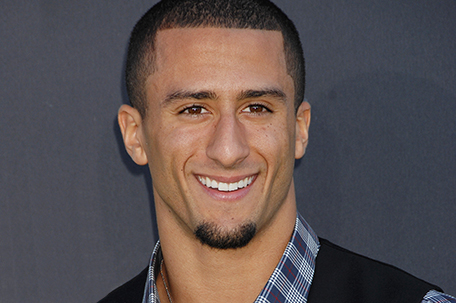 The NFL thought that Colin Kaepernick would take their workout offer at face value. He didn’t.

After watching all the media punditry fallout surrounding Colin Kaepernick’s refusal to attend a hastily scheduled workout in front of 25 NFL teams at the Atlanta Falcons facility in Flowery Branch, Georgia, I ain’t mad at him for holding his own workout somewhere else.

That’s because the NFL’s workout offer was a sham and had nothing to do with Kaepernick’s abilities as a quarterback. It was a publicity stunt orchestrated by the NFL with the express purpose of absolving itself from the sin of blackballing the athlete for kneeling during the national anthem to protest police brutality.

First off, the bone of contention that led to Kaepernick and his camp leaving Flowery Branch was a waiver that the NFL wanted Kaepernick to sign away his right to file a lawsuit against the league should he complete this tryout and still not be offered a contract.

Had Kaepernick’s agent allowed him to sign that waiver, he’d have had every right to fire him on the spot, said Howard Bryant, an ESPN analyst who was probably one of the few reporters commenting on the situation that actually did some homework.

“When you’re talking about this waiver, you’re asking Colin Kaepernick to give up everything,” Bryant said during an appearance on ESPN’s “First Take”. “I think that when you go into a negotiation, you are not expected to give up all of your rights. …When I talked to one of Kaepernick’s lawyers he told me it would be malpractice if I allowed him to sign that document.”

That was the real reason the NFL tried to pull this “workout” together. It was what ESPN’s Max Kellerman called “a Trojan horse” move that served to take away his right to sue the league for collusion.

Throw in the fact that NFL arranged this tryout on short notice without consulting the 32 teams. and the league’s refusal to allow the media or even Kaepernick’s people to film the workout, and you’ll understand why the signal caller’s team caught a whiff of a strong rodent smell.

Sensing that the league was pulling a fast one, Kaepernick seized control of the narrative and arranged his own workout at a local high school that was open to the public and the media. Oddly enough, Kaepernick’s workout was attended by eight NFL scouts.  The video of that workout was distributed to all 32 teams by Kaepernick’s agent.

Of course, the football media pundit class, especially the ones of African American descent, lost their collective minds and blasted Kaepernick for blowing his “opportunity.”  Whether it was ESPN’s Stephen A. Smith, former Indianapolis Colts head coach Tony Dungy or Fox Sports 1 talk show host Shannon Sharpe, the common refrain was “You know how the NFL is.” Or “You knew what you were getting into.”  Or, “He really doesn’t want to play football.”

During the course of his workout, Kaepernick wore a Kunta Kinte t-shirt, another thing that upset the sensibilities of the NFL establishment and appalled some African American sports pundits who felt that particular t-shirt inappropriate for a “job interview.”

(Although, if one of the people reviewing your application was Alex Haley, and you were rocking a shirt with his ancestor Kunta Kinte’s name on it, it might score you some cool points.)

But that said, let me get this straight — Kaepernick should want to play football so badly that he has to apologetically sacrifice his principles or worse yet, not protect himself legally, to do so? Really?

The talking heads on TV are acting as if Kaepernick committed some egregious act against the league and owes the league an apology.

But if anyone owes anyone an apology for real, it’s the NFL.

Kaepernick did not violate any rules, commit any crime or break any laws. All he did was take a knee to protest injustice. Contrary to popular belief, it wasn’t about offending the military or disrespecting the American flag.  He simply wants the country to live up to the “liberty and justice for all” that the flag stand for, but often excludes people of color.

The real crime in the eyes of the league’s White owners was that Kaepernick made white people uncomfortable by reminding the country of it’s unfinished business of working toward racial equality.

On one level, I understand I can understand the reaction of people like Stephen A and other African Americans because through the course of our education, we learn that we have to suppress our Blackness or not be so vocal while working in corporate America. We are taught not to rock the boat to keep White people from being uncomfortable.

Yes, that’s a reality. But how much of our soul and collective psyche do we have to give up to make white America comfortable? I’m not mad at Kaepernick, because he is willing to stand for principle in the face of institutional racism.

If he never plays in the league again, Kaepernick’s soul is intact and what he stood for will last longer than his NFL career.  Sometimes, you have to lose your life in order to save it.

To me, that means you have to be willing to speak truth to power.

Kunta Kinte would have been down with that.

Colin Kaepernick plans to audition for NFL teams on Saturday