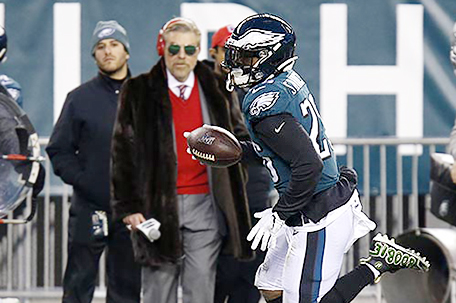 Miles Sanders is making a name for himself.

When the Philadelphia Eagles drafted Miles Sanders from Penn State in the second round of the 2019 NFL drive, the young man who was Saquan Barkley’s backup was seen as part of the Eagles future.

But as injuries to the Eagles key offensive playmakers keep piling up —- Pro-Bowl tight end Zach Ertz joins a bench that includes wideouts Alshon Jeffrey, Nelson Agholor, and Desean Jackson and offensive lineman Lane Johnson ——-Sanders has been getting more and more opportunities to showcase his ability as a duel-threat running back as the Eagles push for a division title and a playoff spot.

Sanders is starting to come into his own as a key weapon in the Eagles offensive attack as the team gets ready for Sunday’s game against the New York Giants. If the Birds win or the Dallas Cowboys lose, Philadelphia will host a home playoff game as the NFC East’s representative.

With so many of his usual weapons unavailable, Sanders has taken up a lot of the slack, quarterback Carson Wentz said.

“Miles has been a big part of the last few weeks, but also this entire year,” he said.  “He’s been a big play guy for us over and over whether it’s in the screen game, the down the field passing game or just running the ball, he’s been extremely dynamic out of the back field. He’s been a huge part of our offense all season.”

In the Birds 17-9 win over the Dallas Cowboys last week, Sanders did a little bit of everything to help his team to put them in position to clinch a playoff berth. In the Eagles running game, Sanders gained 79 yards rushing on 20 carries, including a big 38-yard run that enabled the Birds to run out the clock and secure the win.  He also scored what turned out to be the game-winning touchdown.

Sanders said he embraces the pressure of being an important part of the offense because it’s where he belongs.

In the passing game, Sanders gave Dallas defenders fits, hauling in five passes for 77 yards while helping the team to move the chains in critical situations. He averaged 15.4 yards per catch. For the game, Sanders compiled 156 yards all-purpose yards.

That performance against Dallas enabled Sanders to set the Eagles rookie record for the most All-Purpose yards in a season with 1,590 yards coming into Sunday’s game against the Giants. He is currently leading all rookies in all-purpose yards. He also set an Eagles rookie record in yards from scrimmage with 1,276 yards and is the leader among rookies in that category.

Sanders is the first running back in NFL history to record at least 1,000 yards from scrimmage and 300 return yards in his first 15 games.

Wanting to become a more of a duel-threat running back along the lines of Carolina’s Christian McCaffery or New Orleans Alvin Kamara is something Sanders has wanted to do since he came to Philadelphia.

“That’s the main thing that I’ve been working on. I’m just trying to be more versatile and to be more dynamic,” Sanders said.  “You look at guys like Christian McCaffery and Alvin, I think they’re the best to do it.  You see the top-tier running backs now, they’re not just running the ball. They run the ball effectively and they’re dangerous out of the backfield. I’m trying to be that dynamic running back for this team.”

Head coach Doug Pederson attributes Sanders success to the work he does both on and off the field to help improve his skills in the passing game.  He has 47 receptions for 510 yards and three touchdowns.

The entire time he was at Penn State, Sanders caught 32 passes for 193 yards and 12 touchdowns.

“I see his attention to detail in the classroom, paying attention, taking notes, (running backs coach) Duce Staley does a great job of preparing him in the classroom, what (Sanders) has been able to do through our walk-throughs and practices and taking that from the classroom to the field,” Pederson said. “He’s constantly wanting to get better, wanting to learn the details part of route running. He’s done a great job of just paying attention to those little things … He’s made himself into an explosive back because of that.”

Sanders said he is proud of the progress he’s made this season, especially as a pass receiver coming out of the backfield.

“Since I’ve come here, I’ve been working my ass off,” Sanders said. “I’ve come a long way from catching 30 balls in three years and now I’ve almost 50 balls in one year.”

If you want to see if Sanders hard work pays off against his old teammate Barkley and the New York Giants, tune in to the Eagles/Giants game on Sunday at 4:25.

When It Comes To NFL Quarterbacks, You Need A Solid Backup…