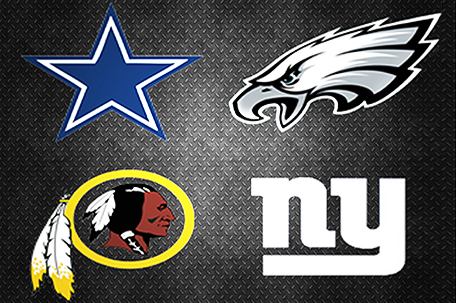 When we looked at the NFC East before the 2014 season, all the sports pundits (myself included) said it would be among the NFL’s weakest divisions and it was a given that the Philadelphia Eagles were going to win the division easily.

Five games into the season, it’s starting to look like the NFC East race is going to be a lot more competitive than what we thought and it’s definitely not the worst division in the NFL.

On Sunday night at Lincoln Financial Field, the Eagles (4-1) will take on a resurgent New York Giants (3-2) squad that’s won three straight after losing their first two games.  Meanwhile, the Dallas Cowboys are the hottest team in the division with four straight wins after losing their season-opener to the San Francisco 49ers.

The Eagles are at the top of the division despite a struggling offense that’s missing center Jason Kelce and guard Evan Mathis and despite the fact that quarterback Nick Foles hasn’t played as well this year with the nine turnovers to go with eight touchdown passes.

“There’s been times when Foles’ had to get the ball in a little quicker manner than we’d like,” said Eagles offensive coordinator Pat Shurmur. “There are times where he’s had some bad footing.  I’d go to one area of the game (against the Rams) where we missed what appeared to be an easy throw to Jordan Matthews, then he followed it up by ripping a seam ball to Mac (Jeremy Maclin) on the next play.”

The Bird’s running game has not been the explosive force that it was last season. LeSean McCoy has yet to rush for over 100 yards in five games this season. He’s averaging just 2.9 yards per carry and just one touchdown. He had his best game of the season when he gained 81 yards rushing on 24 carries in Sunday’s win over the Rams.

Running back Darren Sproles has provided a spark for the Eagles—both catching and running with the football. Two of the Eagles wins have been sparked big plays by Sproles.

Rookie placekicker Cody Parkey is 10-for-11 in field goals including two from beyond 50 yards.

While the Eagles defense rank 29th in the NFL in total defense, they have forced turnovers-two have turned into scores.

Meanwhile, the New York Giants will come into Sunday’s against the Birds on a roll.  Thanks to the performance of Eli Manning, who’s starting to get the hang of offensive coordinator Ben McAdoo’s West Coast offense.

After struggling in losses to the Detroit Lions and the Arizona Cardinals, Manning has tossed eight touchdown passes against one interception in wins over the Houston Texans, Washington Redskins and the Atlanta Falcons. His quarterback rating has been above 100 in each of the last three games and he has completed 70 percent of his passes.

The Giants can also run the football as well. Rashad Jennings leads the team in rushing with 396 yards on the ground and is averaging 4.4. yards per game. Those numbers make him fourth in the NFL in rushing. Jennings will probably miss Sunday’s games against the Eagles because of an MCL sprain.

Rookie Andre Williams will start against the Eagles. The former Boston College star and Heisman Trophy finalist has 131 yards rushing and two touchdowns so far this season.

Defensively, New York ranks 11th in the NFL against the run, but 27th against the pass. Despite that stat, the Giants secondary leads the league in interceptions.

Meanwhile in Dallas, the Cowboys are even on a bigger roll than the Giants, with four straight wins thanks to a powerful rushing attack led by DeMarco Murray, who leads the NFL in rushing with 670 yards.

With the exception of last Sunday’s overtime win over the Houston Texans the Cowboys have won when they run the ball more than they pass. They had a big 38-17 win over a New Orleans Saints squad that blew them out last year.

Because Murray is chewing up yards on the ground, Romo can get the ball out to players Dez Bryant and Jason Witten. The Cowboys are going to make plays in the passing game, but they don’t have to do it on every down and put all the burden of winning on Romo.

The success of the running game has also made it easier for the Cowboys’s 24th ranked defense that everyone said would be the worse in the NFL.  It’s not the best in the world, but it’s not as bad as we thought.

While we still have a long way to go, the NFC East is going to be a dogfight again and there’s always a strong possibility that Washington (1-4) could run off a few wins before it’s all said and done.  It’s not going to be a cakewalk for anybody.