Next time is the charm… 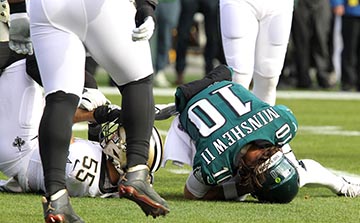 On Sunday, the Philadelphia Eagles will attempt once again to clinch the division and home-field advantage against the New York Giants. But it shouldn’t have had to go that route.

The Philadelphia Eagles had a chance to clinch the NFC East and home-field advantage throughout the playoffs with a win over a sub-.500 New Orleans Saints squad that doesn’t belong on the same field as the team with the NFL’s best record, even with a backup quarterback.

But that’s not what happened.

In the Eagles’ 20-10 upset loss to the Saints at Lincoln Financial Field, backup quarterback Gardner Minshew had a lackluster, if not outright bad, performance against a Saints team that doesn’t scare anybody. He was sacked six times and threw a game-clinching pick-six to Saints cornerback Marshon Lattimore. Minshew completed 18-of-32 passes 274 yards including a 78-yard TD pass to A.J. Brown in the third quarter.

The good news for the Eagles is that they still have an opportunity to clinch the NFC East and a first-round bye with a win over the New York Giants in the regular-season finale at Lincoln Financial next Sunday.

But the key word in that sentence is “win.”

“We’re not going to dwell on it too much,” Eagles tight-end Dallas Goedert said. “We could have obviously clinched everything we wanted, but everything that we set out for at the start of the year is right in front of us. There’s nothing better than playing meaningful football at the end of the year and that’s what we have the opportunity to do. …We just have to find the positive from this game and get ready for this game.”

“When you’re not converting on third down,” head coach Nick Sirianni said, “It’s hard to get in a rhythm, and that’s exactly what happened when we didn’t get a first down.”

Granted, it wasn’t all Minshew’s fault. Between false-start and holding penalties, including one that nullified a 28-yard touchdown run by Kenny Gainwell, the Birds could not get out of their own way. For the game, the Eagles were penalized eight times for 49 yards.

It wasn’t all Minshew’s fault or about the absence of starting quarterback Jalen Hurts because he needed the help of his teammates, said wide-receiver A.J. Brown said.

“If you don’t come out on the field and execute anybody can beat you,” said Brown, who caught four passes for 97 yards and one touchdown. “That was very winnable with the players we had on the field.”

Whether or not Hurts will start for the Eagles in the season finale against the Giants is still up in the air. During his postgame press conference, Sirianni said Hurts is getting better, but didn’t make a commitment one way or the other.

“We’re going to have to evaluate and see where he is. Nothing changes in that aspect of it. His health is the No. 1 priority and not putting him in a position that is going to risk his health,” Sirianni said. “We’ll evaluate that as the week goes. Obviously, if he’s ready to go, he’ll play.”

With the NFC East title and home-field throughout the playoffs on the line, and given the loss to the Saints, it’s a safe bet that you will see Hurts under center when the Birds take on the Giants at the Linc on Sunday at 4:30 p.m. You can catch the game on CBS-3.