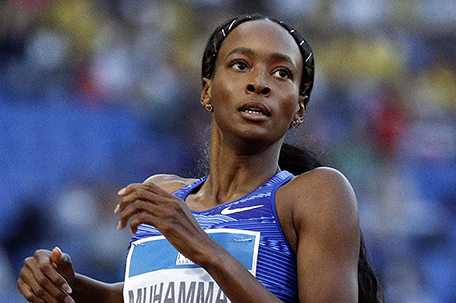 DES MOINES, Iowa — In workouts, Dalilah Muhammad has often been on world-record pace.

On a drizzly Sunday night, she put everything together. Muhammad broke a 16-year-old world record in the 400-meter hurdles by finishing in 52.20 seconds at the U.S. championships.

With puddles formed on the track, the reigning Olympic champion sloshed her way to eclipse the mark of 52.34 set by Yuliya Pechonkina of Russia on Aug. 8, 2003.

Running out of the fourth lane, Muhammad didn’t let the raindrops deter her. She looked at her time and was almost taken aback.

No way that can be real, right?

Muhammad smiled, briefly put her hands on her hips and then slumped down when her time flashed on the screen at Drake Stadium. Third-place finisher Ashley Spencer bounded over to congratulate her as well as teenager Sydney McLaughlin, who hugged Muhammad after finishing second.

To think, Muhammad fell in a training session two weeks ago and suffered a mild concussion. She missed three days of workouts to heal.

She lost none of her speed. Then again, the level of the competition brought out the best in her. A world-class field was assembled — even at nationals.

Muhammad believes it’s not going to last long. It may even fall again at the world championships this fall in Doha, Qatar. Defending world champion Kori Carter didn’t even compete at nationals in the event since she has an automatic bye into worlds.

“It was a really fast race and I could feel the pace being pushed,” McLaughlin said. “I’m happy to be a part of a world-record race. It’s awesome.”

“I woke up this morning and I’m like, ‘I’m not going to be denied,’” Bryant said. “That was my attitude.”

Noah Lyles closed out the competition in style by doing a nifty little dance after taking the men’s 200 title in 19.78. He held off Christian Coleman and, after crossing the line, shook his rival’s hand before breaking off some dance moves.

The 22-year-old Lyles can certainly celebrate.

“Joy? Tons of joy. This is the hardest team to make,” said Lyles, who sprayed his hair gray. “The saying is, once you make the U.S. team, you better come away with a medal.”

Phillies can’t overcome youth and inexperience in loss to Nationals