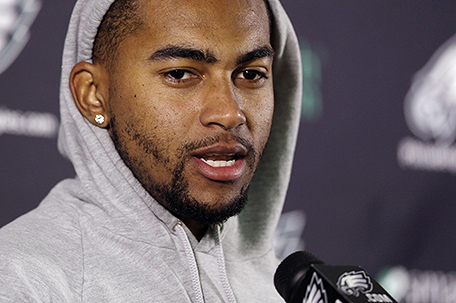 The Philadelphia Eagles and the City of Brotherly Love have not seen the last of wide receiver DeSean Jackson.

Five days after the Birds kicked Jackson to the curb, he signed a three-year, $24 million contract ($16 million guaranteed) with NFC East Rivals the Washington Redskins, making him part of an offense that already includes quarterback Robert Griffin III and wide receiver Pierre Garcon.

In a phone conference with the Washington media, Jackson avoided the subject of his departure from the Eagles and his relationship with head coach Chip Kelly.

But he disputed reports saying that his attitude was what got him released from the Eagles.

“People that know me, know what type of player I am, they respect me and know that I am a team guy,” Jackson said. “(Attitude) has never been a problem.”

The 5-foot-10 Jackson is coming off a career year with 82 receptions for 1,332 yards and nine touchdowns. With his ability to stretch the field in the deep passing game, Jackson’s deep speed kept opposing safeties from closing the box, something that helped running back LeSean McCoy lead the NFL in rushing in 2013.

Getting released by the Eagles was the best thing for him after having the best year of his career, Jackson said.

“It was a humbling experience and me being at the peak of my career and doing some great thing …I’m very humbled to be released like that,” Jackson said.

Jackson’s ability to stretch defenses also enabled players like Riley Cooper, who recently signed a five-year deal, to have career years. Since 2008, Jackson has been one of the league’s most dangerous deep threats and 35 receptions of 40 yards or more. In six years with the Eagles, Jackson caught 356 passes for 6,117 yards and 32 touchdowns.

On his Instagram page, Jackson posted a picture of the ESPN report announcing the deal with Washington. The caption, in all capital letters, read: “ITS GOIN DOWN!!BURGUNDY AND GOLD.”

The Eagles parted ways with Jackson last Friday, but have yet to come up with an explanation for why they let him go. It has been widely speculated that Jackson’s relationships with alleged members of the Los Angeles street gang, “the Crips” played a part in his dismissal.

About an hour before the Eagles cut Jackson, NJ.com released a story that focused on the ties that Jackson reportedly has with L.A. gangs. Oddly enough, the Los Angeles Police Department said Jackson has never been involved in gang activity or connected to a crime.

Neither general manager Howie Roseman nor Kelly spoke to reporters after word got out that Jackson was cut, a move that has drawn criticism from fans. Much of the team’s African-Americans fan base and members of the local and national media felt the team leaked the story in an effort to justify releasing the wide receiver, who had been trying to get his contract restructured at the time.

The bottom-line here was that Kelly did not feel that Jackson was a part of the culture he wanted to create for the team and didn’t get along with the former Cal-Berkeley star. Perhaps if the team would have said as much it might have minimized some of the public acrimony.

Another thing bothering fans is that not only did the team not get anything for the speedy Jackson, he signed with NFC East rival Washington. If Griffin III is healthy, the combination of Jackson and Garcon will be a formidable challenge to the Eagles secondary.

Now that Jackson is gone, Eagles fans are focusing on next month’s draft and wondering if the team is going to pick up a wide receiver in the draft to replace Jackson’s contribution to the offense.  The Birds have the 22nd pick in the draft. Because the draft features a deep class of wide receivers according to draft experts, the Eagles could find someone to pick up the slack left by Jackson’s departure.

But what if they don’t?

As much as I like Jeremy Maclin, I’m not convinced that he’s fully recovered from his knee injury and I’m not sure if Riley Cooper will find the open spots he found last season because there’s no one to fear now that Jackson’s gone.  Quarterback Nick Foles needs to have a game-breaker at the receiver spot.

If the Eagles think they can get by with the wideouts they have on the roster now, they’re deluding themselves.

Unless they get someone in the draft that can equal Jackson’s production, it’s going to be a long year for Gang Green.