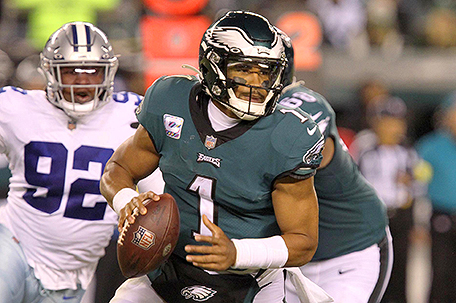 As the Philadelphia Eagles go into their bye week as the NFL’s only undefeated team, quarterback Jalen Hurts deserves a lot of the credit.

If there’s one thing that I’ve learned in my time covering sports, it is that all great teams have that one player who can lift his team high enough to clinch a close game.

You can say that about a Michael Jordan hitting clutch baskets in the fourth quarter, a Mariano Rivera coming up with a save with the bases loaded, or a Tom Brady completing a game-winning drive with a touchdown pass.

In the Eagles’ 26-17 win over the Dallas Cowboys, Birds quarterback Jalen Hurts found himself in a situation where he had to lead his team down the field in a scoring drive to put the game away. In the first half, the Eagles jumped out to a 20-0 lead only to have the Cowboys score 17 unanswered points to cut the lead to three points with 14:39 left in the game.

After a third quarter in which the unbeaten Eagles managed just six yards of total offense, Hurts was determined to impose his will on a Cowboys defense that sacked him four times and, at times, was giving the Eagles’ offense a hard time.

During his college years at both Alabama and Oklahoma, Hurts has played in many big games where he’s had to lead comebacks or put teams away in the fourth quarter.  Back in 2019, he led Oklahoma from a 28-3 deficit to a 34-31 road win over Baylor.

So, he’s no stranger to having to pull out tough games. For all those who witnessed last Sunday’s game against Dallas, you saw a guy who wasn’t overwhelmed by the moment and was resolute about ensuring his team picked up the win.

“You can be aggressive, throw the ball, you can run the ball, whatever it is, Hurts said. “But you have to be able to do it efficiently.”

On the Eagles’ final 13-play, 75-yard drive that lasted 7:37 seconds, Hurts utilized his legs, his passing arm, the offensive line, and the Birds running backs to impose his will on the stubborn Cowboys defense. Hurts finished the clutch game-clinching drive with a seven-yard touchdown pass to Devonta Smith.

“This guy is not fazed by things,” said Eagles head coach Nick Sirianni. “He’s got a great demeanor you see in great quarterbacks … He made a big play on third and four when we didn’t have anybody open. He made a play with his legs. He controlled the offense, he used the clock. He was in complete control in communicating our message to the offensive line and the running backs in that scenario. It was ‘Quarterback 101’ for Jalen.”

After the Eagles jumped out to that big lead in the first half, they spent most of the third quarter going nowhere fast and they were 0-for-2 on third down conversions. In fact, they didn’t a have first down at all.

But like that shooting guard in basketball that struggles for most of the game, Hurts was great when his team needed him the most. He didn’t panic and found a way to get himself and his teammates back in the game.

“We needed a spark and that’s what he gave us,” Smith said after the game. “That’s what it came down with us having a spark and not killing ourselves.”

The undefeated Eagles are taking their bye-week this week. They next take the field against the Pittsburgh Steelers at 1 p.m. on Oct. 30. You can catch the game on CBS-3, beginning at 12:30 p.m.