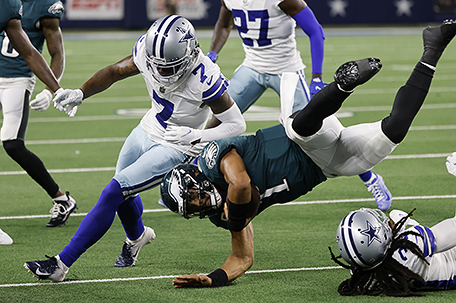 On Monday night’s football game against the Dallas Cowboys, the Philadelphia Eagles showed that they need a whole lot of work.

You can look at the Philadelphia Eagles 41-21 loss to the Dallas Cowboys Monday night and come to the stark conclusion that the Birds were simply awful on both sides.

Throughout the course of the game, the Eagles could not find any kind of rhythm on offense. Jalen Hurts, starting in just his seventh game, looked like an inexperienced rookie and threw a pair of interceptions that were his fault.

On first interception on the Eagles first drive of the game, Hurts clearly underthrew Jalen Reagor on a go-route near the Cowboys end zone. He needed to step up and put more arm on that throw and he would have had an easy touchdown pass.

Throughout the game, Hurts tended to lock in on receivers to the point where the Cowboys defensive backs knew exactly where he was going with the ball, which resulted in some batted balls and a 59-yard pick-six for Cowboys safety Trevon Diggs.

That play put the Eagles in a deep hole that they wouldn’t come back from.

While it’s obvious that Hurts has to work on his accuracy — on the play before the Diggs interception, he overthrew a wide-open tight end Dallas Goedert — he did have some good moments. He led the team to a pair of touchdowns including an eight-play, 90-yard touchdown drive that ended with a three-yard touchdown pass to tight end Zach Ertz to cut Cowboys to 13. He also threw another touchdown pass to Greg Ward when the Cowboys were up 27 points.

In the end, Hurts finished a lackluster performance by completing 25-of-39 passes for 326 yards with two touchdowns and two interceptions. Most of the numbers came when the game was out of reach.

To be sure, it wasn’t all Hurts fault because head coach Nick Sirianni and the Eagles offensive coaching staff didn’t do much to protect Hurts who was under constant attack by the Dallas defense.

And that’s because Sirianni had a game-plan that was somewhere between “Harry High School” and the goofy things that kids do on the Madden video game.

The first-year coach inexplicably abandoned the Eagles running game with Miles Sanders, who gained 27 yards on just two carries, and Kenneth Gainwell, who gained two yards on one carry. The Cowboys’ run defense does not strike fear into anyone around the league. Sanders got most of his yardage on a 24-yard run. You would think Sirianni and his band of geniuses would have thought to run the ball even more with Sanders and maybe take the heat of Hurts.

After the game, Sirianni said the Eagles stayed away from the run and didn’t put the ball in Sanders’ hands because they were constantly playing from behind.

“When you don’t have that many plays in the first half because you have penalties that stop drives. Defense was on the field quite a bit and then you’re in a position in the second half when you’re down two scores the whole — that’s where that comes into play,” Sirianni said.

“Obviously, (Sanders) is a great playmaker, and we want him to touch the ball more. It was just [how] the game went [and] we weren’t able to do that.”

I don’t buy that because the running game might have calmed your quarterback down and given the Eagles the opportunity to run some play-action passes to keep the hard charging Cowboys defense from planting Hurts into the ground.  The Eagles were just too predictable on offense.

You can also point to the many penalties the Eagles committed throughout the game. The Birds committed 13 penalties for 86 yards.

The Eagles defense, outside of scoring a touchdown off a Dak Prescott fumble in the end zone in the first quarter, couldn’t do anything with the Cowboys. Prescott completed 80 percent of his passes, completing 21-of-26 passes for 238 yards and four touchdowns.

The Cowboys duo of Ezekiel Elliott (17 carries for 95 yards and touchdowns) and Tony Pollard (11 carries for 60 yards) provided most of the 160 yards on the ground.

Defensive coordinator Jonathan Gannon had no answer to anything about the Cowboys and did not make any kind of adjustments to what the Cowboys were doing in the running game and passing game. Dallas took what it wanted from the Eagles.

The sober reality that you come to about this team is the coaching staff is over its head, Hurts is still a work in progress after the seventh game of his career, and that at some point, Howie Roseman and the Birds player personnel staff will value the linebacker position.

Finally, this is going to be a long season if the Eagles don’t figure out a way to be more consistent on both sides of the ball.  You got the high-powered Kansas City Chiefs and Patrick Mahomes coming into Lincoln Financial Field on Sunday with something to prove after two straight losses.