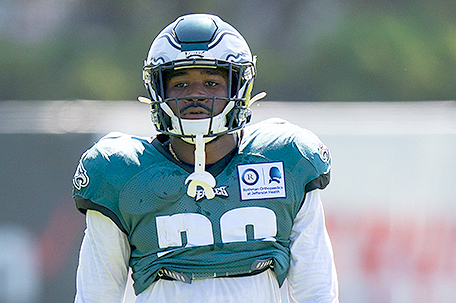 Philadelphia Eagles running back Miles Sanders is ready to carry the load for the team’s rushing attack.

The popular view of Philadelphia Eagles running back Miles Sanders coming into the 2020 season is that he’s a more like a slightly bigger version of Darren Sproles who can get about 15 touches a game by occasionally running the ball and catching it out of the backfield.

Even though Sanders had 818 yards rushing with three touchdowns and 50 receptions for 509 yards and three touchdowns, there are more than a few observers who say that he is not an every-down back. And some fantasy football leagues are saying not to draft Sanders with a high pick.

Just don’t say that to assistant head coach Duce Staley, who said Sanders is good enough to carry the load of an every-down running back.

Sanders can break tackles and make opposing defenses miss in the open field. Those types of running backs tend not to get as hurt as more physical ball carriers, Staley said.

“I don’t think you have to be careful with (Sanders) because he’s one of the guys that’s hard to get a hit on. I think you have to be careful with the guys that can’t make people miss, so you put a big workload on those types of guys.  … “But if you got a guy that can make people miss and are kinda special like Miles, the injury percentages go down.”

Sanders proved his worth last season by having a solid work ethic and learning every aspect of the Eagles offense during his rookie season. When running back Jordan Howard went down to an injury late last season, Sanders impressed the coaching staff to the point where they can trust him to carry the load for the Birds running game.

“I think (Sanders) can go out there and handle that part of it,” Staley said. “He showed that last year. He worked hard. He got to know the offense- the passing game and the running game. He was running routes out of the backfield. His hands got better. You saw a kid get better every week.”

Coming into this season, Sanders said he’s ready to take on the extra load as the Eagles lead running back in 2020, even with all of the distractions that come with being in the midst of a global pandemic.

“I approach every year like I’m the guy,” Sanders said. “With everything being solidified, I’m just making sure I come back stronger faster and smarter so  that I can do both run the ball effectively and strong and just be effective in the passing game with speed and be good with my hands.”

Going through the usual learning process of a rookie in 2019, Sanders said that he started to find his stride with the Eagles offense in the win over the Buffalo Bills. In that game, he had three carries for 74 yards including a 65-yard run for a touchdown. He also caught three passes for 44 yards.

In the last four games of the 2019 season, Sanders helped the Eagles to be more explosive on offense. In two key wins over the Washington football team and the Dallas Cowboys, he was double digits in combined passing and rushing yards — including rushing for 100 yards against Washington.

“Towards the end of the season probably after that Bills game and going on to the last four games of the season that’s when I started feeling more comfortable,” Sanders said. “I had a good grasp of the playbook and the system and how everything was run and I was able to go out there and play and that’s when everything starts going smooth.”