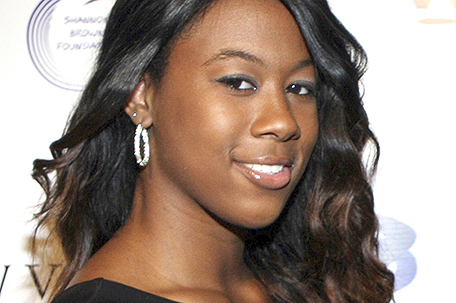 ABOVE PHOTO: This Aug. 18, 2012 file photo shows Jasmine Jordan, daughter of Chicago Bulls basketball great Michael Jordan, at the Shannon Brown Wood-Star Foundation Dinner in Chicago. Jordan is getting an intimate look into the psyche of her heralded father, Michael, just like the rest of the world. The 27-year-old wasn’t born when her dad won the first two of his six championships with the Chicago Bulls, so like many watching “The Last Dance,” there are some things she’s learning for the first time.  (Photo by Arnold Turner/Invision/AP, File)

Jasmine Jordan is getting an intimate look into the psyche of her heralded father, Michael, just like the rest of the world. The 27-year-old wasn’t born when her dad won the first two of his six championships with the Chicago Bulls, so like many watching “The Last Dance,” there are some things she’s learning for the first time.

“I’m definitely texting him nonstop. I think there hasn’t been an episode, a Sunday where I haven’t been like, ‘This happened — let me know your thoughts,’” says the youngest and only daughter of his three adult children with Juanita Vanoy. (Jordan has 6-year-old twin girls with current wife Yvette Prieto Jordan.) “I was super young, so I’m really taking this in as a fan.”

The 10-part docuseries, airing on ESPN in the United States and on Netflix elsewhere, details the 1998 Bulls’ season, Jordan’s final year with the team and the organization’s last championship. While it focuses on the challenges and triumphs of Jordan’s illustrious basketball career, it also delves into personal tragedies, such as the murder of his father, and scandal, such as his public gambling habits.

The Associated Press talked with Jasmine Jordan about growing up as his child, his legacy, and what can turn one of the most intimidating players in the history of basketball turn into Silly Putty. The conversation has been edited for brevity and clarity.

AP: Everybody’s been going crazy over “The Last Dance.” What’s been your perspective?

Jordan: It’s been incredible to watch. You know, I didn’t get any previews or anything like that, so I’m watching it real time with everyone else and really just taking it in as a fan, essentially. So it’s been really eye opening. I think if you remove the basketball aspect and all the accolades he achieved for obvious reasons, I think I’m definitely learning that my dad was really trying to take in the pressures and the expectations and not allowing it to weigh on him and really manifesting it to his own. …I’ve definitely been seeing him really take on that role and embracing that role and not running from it and really becoming the greatest player to ever play the game. That’s because he always wanted to do that.

AP: When you see some of those like emotional moments, do you recognize that person as your dad?

Jordan: Some of them, yes. Some of them I do. I know when it comes to the game, his passion is unmatched. His energy’s unmatched. So when he’s going at Steve Kerr or checking Scottie and trying to get that fire and tenacity out of them, I’m like, ‘Oh, yeah, that’s Dad.’ I mean, he’ll do that to me just so I can get an A out of a test or two. (laughs) And I’m just trying to pass school, I’m not even winning championships. So that is definitely totally him.

AP: What type of father was he to you?

Jordan: I was definitely a daddy’s girl growing up. And, you know, he still calls me ‘Princess’ to this day and I’m almost 30. … He definitely wanted to coddle and protect and nurture and baby me as much as he can. But you also knew the harsh reality of the burden that I was going to have to endure the older I got. So he wanted to make sure I had tough skin. And I understood that, hey, there’s going to be a target on my back.

AP: How did your relationship, or did it, change after your dad retired?

Jordan: When he was playing, he did his best to be as involved as he could be while I was growing up. He made sure to take me to school when he could or go to my recitals and dance and things like that that I was a part of. So once he retired, it definitely was a change in gears, and it was something that he and I really had a conversation about. It’s like, “OK, you’re done. So how do we work on the relationship? How do we even make it stronger than what it was like?” So we definitely really worked hard and put forth that effort because obviously once you take something you love away from somebody, it’s that hole — it’s a void. So do you fill it or do you just adjust? He definitely adjusted versus trying to find something else to fill it, and that’s something I appreciated. … That’s how we’re so close today.

AP: What type of grandfather has he been to your son?

Jordan: He’s Silly Putty. My son has him wrapped around his fingers already. He’s been very hands on and very involved in my son, even during these crazy times. He FaceTimes everyday or Zoom or something just so that way, that relationship can continue to cultivate and bond and grow. But no, my dad would probably let my son get away with murder at this point. … It’s an incredible relationship to see them develop.

AP: I’m surprised your dad has been this open, just being a fan. So are you surprised at his candor and his openness?

Jordan: Absolutely. It’s definitely surprising because my father is very private. He doesn’t like to comment on social matters or he doesn’t like to respond to things when people want him to. He definitely likes to move methodically on his terms and on his time. And then with saying that, seeing the documentary unfold and he’s getting emotional and he’s sharing his insight and perspective, it’s been incredible to really see. And I love it because it gives — that human nature that I think people forget. You know, he is this incredible phenom, and he’s the G.O.A.T., and everything along those lines. But he’s also human.

Michael B. Jordan, now a Hollywood heavyweight, punches up