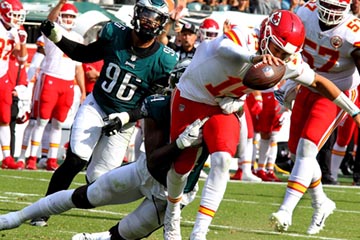 If nothing else, the Philadelphia Eagles loss to the Kansas City Chiefs shows just how much work needs to be done.

After the Philadelphia Eagles 42-30 loss to the Kansas City Chiefs, fans are going to have to reconcile themselves with the notion that their Birds are a young team that’s still a work in progress.

And boy, do they need a lot of work!

Even though they played a lot better on offense than they did against last Monday night in Dallas, the Eagles couldn’t keep up with Patrick Mahomes and a high-powered Chiefs offense that scored touchdowns on six of their seven possessions against the Birds defense. Kansas City (2-2) rolled up 471 yards of total offense—including 200 yards on the ground.

Mahomes torched — blitzkrieged is more like it — the Eagles secondary for five touchdown passes including three to speedy wide receiver Tyreek Hill. The former Texas Tech star passed for 278 yards and completed 24-of-30 passes.

The Eagles defense had no answer for Mahomes and the Chiefs offense. It was the second straight week in which the defense gave up 40 or more points. The only time the Eagles stopped the Chiefs today was when linebacker Eric Wilson intercepted a pass on Kansas City’s first possession of the second half.

After two games straight of giving up 40 points, it’s time for the defense to figure things out, said Eagles cornerback Darius Slay.

Jalen Hurts had a better individual performance against Kansas City than he did in the loss to the Cowboys. He completed 32-of-48 passes for a career-high 387 yards and a pair of touchdowns. Unfortunately, the Eagles left points off the field because of poor execution in goal-to-go situations and penalties.

“When you’re playing a team like that, you have to convert there,” Eagles head coach Nick Sirianni. “It’s everything. It’s the plays I’m calling. It’s the lack of execution. I’ll always have it start with me. When the plays don’t work, that’s on me. I have to call better plays. I have to put our guys in better positions to win.”

Three touchdowns were nullified by penalties. In the second quarter, a six-yard touchdown pass from Hurts to Dallas Goedert was called back because left tackle Andre Dillard was flagged for ineligible man downfield.

Later, on that same drive, a Kansas City penalty put the ball at the three-yard line. One the first play, Hurts had a wide-open Greg Ward in the endzone, but threw it too hard and it caromed off the receiver’s hands. On second down, running back Miles Sanders was thrown for a four-yard loss and a Jalen Hurts pass to Quez Watkins fell incomplete. That drive would end with a Jake Elliott field goal.

For the game, the Eagles scored just two touchdowns on goal-to-go situations with the second one coming late in the fourth quarter when the game was out of reach. Hurts said he and the offensive have to do a better job.
“It’s not something I can really pinpoint. I’m going to take accountability for everything on my end, you know what I’m saying?” Hurts said after the game. “Whether it’s being more decisive down there or flat out just executing and getting into the endzone, we got a lot of playmakers that need to get in. It was a difference in this game, clearly.”
Early in the third quarter, a three-yard TD pass to tight end Zach Ertz on fourth down was also wiped out by a questionable offensive pass interference call on wide receiver J.J. Arcega-Whiteside. The Birds had to settle for another Jake Elliott field goal.

Late in the fourth quarter, a 34-yard touchdown pass from Hurts to rookie wide receiver Devonta Smith was called back because he stepped out of bounds and was penalized for illegal touching of the ball.

After the game, Hurts spoke before his teammates about the loss. He said he reminded his teammates that they are capable of being a good team, but it’s up to them to do it.

The Eagles will try to stop their losing streak next Sunday when they take on the 3-1 Carolina Panthers. Kickoff is at 1pm and you can catch the game on Fox-29.