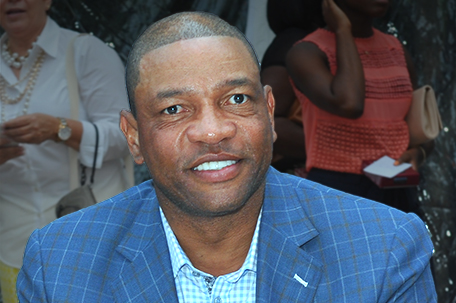 New Philadelphia 76ers coach Glenn “Doc” Rivers has worked with some of the NBA’s premiere talents. He’s hoping to bring his magic to the City of Brotherly Love.

If there is something to be hopeful about the with the new era in Philadelphia 76ers basketball new coach Glenn “Doc” Rivers is about to start, is that the team has a coach who knows how to coach superstars and hold them accountable.

Rivers’ experience with making champions out of his guys like Kevin Garnett, Ray Allen, and Paul Pierce is nothing to sniff at, so when he talks about demanding accountability from his players, you definitely have to listen.

That said, getting Ben Simmons to start hitting 15-foot jumpers and motivating Joel Embiid to stay in shape might be another story. But, Rivers, who coached superstars Kawhi Leonard and Paul George before coming to the Sixers, feels he’s up to the task.

Rivers has 943 wins as a coach, one NBA title and two Eastern Conference titles. In 2008, he transformed a Celtics team that finished 34 games below .500 into an NBA champion.

They won because Rivers was able to get Garnett, Allen, and Pierce on the same page.

The former Marquette star believes he can do the same here.

“We have two young ones here in Philadelphia that have already had success, so my job is to add to that,” Rivers said. “To try to get them, to take them to a place that they’ve not been. “They’ve done a lot of winning, but we want to be the winner. Winning is great, but being the winner is the best.”

While the Sixers need a few more players to go along with Embiid and Simmons, Rivers might be the driving force of getting the most out of his superstars. He has proven in his coaching career that he can get enough out of the players. I really believe that he can make this Sixers team a contender for an NBA title.

But, what the Sixers are really wondering about Rivers is if he can get Simmons to develop a 15-foot jump shot to add to his game. I’ve often said if Simmons can learn to hit a 15-foot jumper on a consistent basis, he can take his game to an even higher level.

When asked about that, Rivers wasn’t going to come out and say that he was going to turn Simmons into a jump shooter. He said he is more concerned about putting the team in a better   position to score and that’s something Simmons is good at doing.

“This is what I know about Ben, he’s an All-Star, he’ an All-Defensive player and the games that he and (Embiid) have won 65 percent of the time. I don’ see a lot of bad there,” Rivers said. “I’m sure that there are things that there’s thing that we’re going to work on and get him better. “