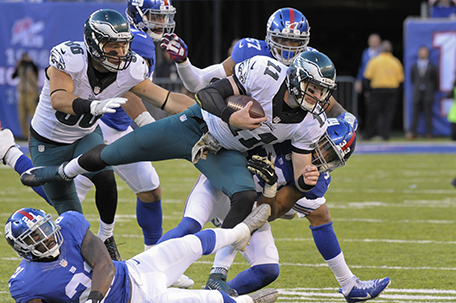 For the Philadelphia Eagles, staying healthy is key

Now that the final whistle has blown to end the Philadelphia Eagles third preseason game, the Birds will be racing against time to make sure that everybody is healthy and ready to take the field before the Sept. 6 opener versus the Atlanta Falcons.

To be honest, the game wasn’t much of a dress rehearsal because a number of key starters didn’t play in Thursday night’s game against the Cleveland Browns.

Some of these absences were known about in advance. Quarterback Carson Wentz, who is recovering from torn knee ligaments, participated in 11-on-11 practice drills for the first time in three weeks since training camp opened.  The injury was supposed to take nine months to a year to heal, but because of his progress, doctors will evaluate to see if he’s ready to play now.

According to what I’ve seen in practice, I wouldn’t be surprised if Wentz is under center Opening Night.

“It’s extremely close  … the final hurdle will be being cleared for contact,” Wentz said in a press conference on Monday. “Everything’s been going well. It’s been a constant progression. I feel really good about where I am at. …It’s the doctor’s decision. I’m going go by what they say.”

“I have no really hesitation in the pocket with guys around me,” Wentz continued. “I feel really good, but it’s going to come down to if they feel confident in contact and when they’ll do that, I don’t know.”

While he won’t say that he’s ready to pencil Wentz into the starting slot, Doug Pederson, the Eagles head coach, likes what he’s seen.

“He’s moving well,” he said. “ He’s making good decisions, throwing the ball extremely well. We talked about his arm the other day being live and fresh. He’s doing the right things with his rehab and [I] have been excited with the stage that he’s in.”

While you have to admire Wentz’s competitive spirit, you would hope that Pederson and the Eagles coaching staff aren’t going to rush him out there, especially when you still have Super Bowl MVP Nick Foles as your backup.

But Wentz wasn’t the only Eagles starter on the shelf in Cleveland.  Birds kept starting running back Jay Ajayi, Darren Sproles, Corey Clement (lower body), Josh Adams (lower body)  and Donnel Pumphrey (hamstring)  did not practice this week.  Veteran running backs Wendell Smallwood and Matt Jones got most of the reps in practice.

“It’s unfortunate for the other guys that are nicked up because we want to see them as well, but at the same time, it’s a great opportunity for [RB] Wendell [Smallwood] and [RB] Matt [Jones] and for them to get some really extensive time in this game,” Pederson said.

Last season, the Eagles found a way to get to the Super Bowl and win it because of their ability to find other guys who were able to step in and make key contributions.  But that doesn’t always happen and the Birds may not be so lucky this time around.

That’s why the Eagles coaching staff are hoping against hope that they can have most of their starters on the field when they open the season with Atlanta at the Lincoln Finacial Field.