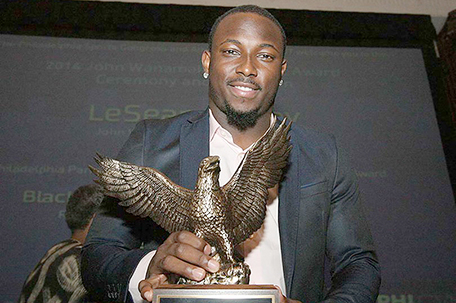 Eagles running back LeSean McCoy has no illusions about the huge target on his back coming into the 2014 season.

That’s something that McCoy knew last season en route to being the NFL’s leading rusher. The former Pitt star believes that there is a target on the entire Eagles team as they go about proving that last season wasn’t a fluke.

“When we put up numbers rushing the ball after the first game (2013), they were gunning for me and so that’s never going to change,” McCoy said. “People always talk about you putting stuff up on the bulletin board, but you know it’s football. They’re going to hit me if I talk or I don’t talk. It doesn’t matter to me.The good thing is that I have a supporting cast around me. So if they do want to take me out, this guy is going to make plays.”

Of course, McCoy was talking about teammates like Jeremy Maclin and Riley Cooper stretching the field in the way former Eagles wideout DeSean Jackson did last season. The Birds will also have former Saints running back Darren Sproles using his speed to open the field for McCoy as well.

McCoy is also expecting another outstanding season from quarterback Nick Foles, who had a breakout season leading the Birds to the playoffs in 2013.

“It all starts with the offensive line and then Nick, he’s the same Nick from the records he had from last year to this year. He’s more confident knowing that he’s the starter. He’s the guy no matter what happens,” McCoy said.

“Then you add Sproles in the backfield and we can do some things together. There’s no drop off there. I think the big difference might be DeSean (Jackson), but Macklin’s back and you won’t see that much of a difference. We all know Maclin can play. The new rookies we got are pretty good. I’m anxious to see how this works out.”

In 2013, McCoy gained a league-leading 1,607 yards rushing while scoring nine touchdowns. He also caught 52 passes for 539 yards and two touchdowns. In all, McCoy amassed 2,146 yards from scrimmage to lead the NFL.

“Good things come to those who work really hard and he’s worked really hard and now he’s reaping and that’s a good thing,” said former Eagles running Brian Westbrook, who played with McCoy when he was a rookie. “I saw the hunger, I saw the drive there. The talent was there as a second rounder so you have to develop it. He’s done a great job.”

McCoy was recently honored by the Philadelphia Sports Congress as its John Wanamaker Athletic Award for his prowess on the field and his involvement in the community.

Another honor that McCoy recently received from is that he was voted among the NFL’s Top 10 Players of 2014 as voted by his peers around the league. McCoy also turned more than a few heads during the offseason by saying he’s the best back in the league.

“As a back, I do everything — from running, catching, blocking, third-down guy — mixed in and out,” McCoy said in a recent ESPN interview. “There’s nothing that if you ask me to do that I can’t do. So, that aspect, I said the last three years, there isn’t a back that’s been more productive.”

With training camp and the 2014 season looming on the horizon, McCoy said he’s done with all the trash talk. He said it’s time to take it to the stage and do it when the game’s count.

“It‘s time for training camp and to put the pads on. At the end of the year and we’re at the same place again, I’ll say the same thing again. I’m tired of talking about it. Muhammad Ali said it a lot but he didn’t say it all the time.”