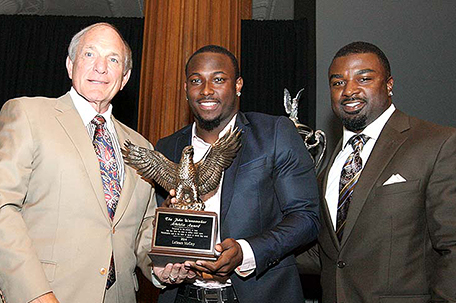 Philadelphia Eagles running back LeSean “Shady” McCoy and a group dedicated to expanding the options for sports women of color were among the people and organizations honored by the Philadelphia Sports Congress at the group’s 2014 Wanamaker Awards last Wednesday.

McCoy, who led the NFL in rushing and in yards from scrimmage, was honored with the John Wanamaker Athletic Award at the ceremony, which was held at the Crystal Tea Room. The Wanamaker Award is presented to the athlete, team and organization that has done the most to reflect both their sport and the City of Philadelphia.

“It’s a pretty nice honor to go along with all my other accolades and awards,” said McCoy, “It’s something very special.”

“I think it’s an honor for him,” said former Eagles running back Brian Westbrook. “I think it’s a great representation of what he’s been able to do on the football field. … It really speaks volumes about what type of person and player he is.”

As the head coach of the Owls women’s lacrosse team from 1973-1992, Green led Temple to three national championships and 11 straight Final Four appearances. She has co-authored two books and has received lifetime achievement awards from the National Association of Collegiate Women Athletic Administration and the National Women’s Lacrosse Coaches Association.

Sloane-Green, Nicki Franke, Linda Green and Alpha Anderson founded the Black Women In Sport Foundation in 1992. The purpose of the organization was to raise the profile of Black women in non-traditional sports including lacrosse, field hockey, golf and tennis, and to help increase the number of women in all aspects of sport including coaching and athletic administration.

“It’s very rewarding,” Tina Sloane Green said. “Researchers are always looking outcomes. I see it.  I see it in this room. I’ve seen lawyers, doctors, coaches and athletic administrators. They got this done through the Black Women in Sports Foundation. It works.”

“We wanted to increase the participation of Black women in non-traditional sports, so that was the emphasis in terms of going forward,” Anderson said. “Title IX was good for women in sports, but they forgot about the Black woman in all aspects of sports-coaching and administration. It has been huge to see the on-going programs being conducted in Philadelphia [by Sloane Green].”

“Tina has been a major force and factor in the country,” Anderson continued, “The other thing about Tina is that she has nothing to lose. She can talk, she can be a voice out there …She’s well respected. She means what she says and then she sees it get it done.”

The Philadelphia Sports Congress also honored Rosalva “Ruth” Bull as its Sports Volunteer of the Year for her work as the founder of the International Tuzos Philadelphia Soccer Academy, a school which teaches kids from 6 to 14 while helping parents with their children’s education.

Eagles named Global Sports Team of the Year by Beyond Sport