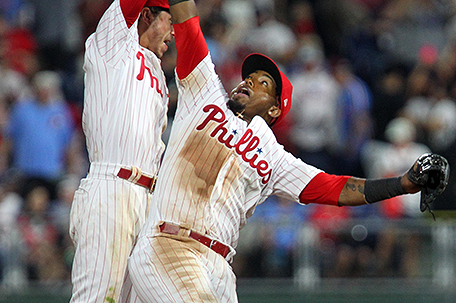 In spite of the team’s penchant to find really unique ways to avoid getting into Major League Baseball’s postseason, the 2022 version of the Phillies has other ideas.

ABOVE PHOTO: Phillies players celebrate their win against the Pirates.  (Photos by Webster Riddick)

Coming into this season, the Philadelphia Phillies have found unique ways to eliminate themselves from playoff contention, whether it was through a lack of hitting, poor defense, late-season losses to sub-.500 teams or the bullpen blowing leads and saves.

I don’t think you’re going to say that about the 2022 Phillies (72-55), a team that is currently in the second National Wildcard spot by a half game over the San Diego Padres. They own the tiebreakers against the teams that are chasing them like the Padres, the St. Louis Cardinals, and the Milwaukee Brewers.

This Phillies team is simply better than the teams of previous years because of their manager Rob Thomson. The Phillies started the season 22-29 and seemed to be going nowhere fast. That’s when the Phillies fired former manager Joe Girardi and elevated Rob Thomson to the position interim manager position back on June 1.

Since Thomson became the team’s interim skipper, the Phillies are 51-27 (.653). Phils starting pitcher Kyle Gibson said Thomson has made a huge difference because he re-affirmed the confidence the team already had in itself.

“It’s meant a lot. The mindset, the tone in the clubhouse,” Gibson said. “We were still confident up until June 1. It was just a matter of time. A little bit of the air got let out of the room when Girardi was fired and (Thomson) came and just kinda reaffirmed his confidence in our club and I think it was something that we needed.”

Of course, the one thing the Phillies will have for this stretch run is an offensive lineup that is capable of knocking the ball out of the park at any time. Leftfielder Kyle Schwarber is leading the National League in home runs with 36. The only person in the majors who has more round trippers than Schwarber is New York Yankees outfielder Aaron Judge.

What has been remarkable about the Phillies’ offense at this juncture of the season is that they have managed to stay hot despite the absence of 2021 NL MVP Bryce Harper. The Phillies were 35-20 with Harper on the disabled list due to a broken thumb.

In his first two games back from his injury, Harper is 2-for-6 with a pair of runs batted in. He was intentionally walked twice in the Phillies’ 6-0 shutout of the Pittsburgh Pirates last Saturday night. With Harper back in the lineup, the Phillies are going to be tough to beat.

Not only do the Phillies boast one of the top hitting teams in the National League, but they have also done a better job on the mound both starters and relievers.

“I think we’ve got a really good bullpen. We feel like we’re going to close out games,” Thomson said. “We feel like if we’re down in the game, we go to the pen, they’re going to hold it for us until we score. I think it’s a lot of confidence in this group. It’s a different group than the last few years. There’s more talent and they’re very confident right now.”

One of the emerging stars among the Phillies relievers has been Seranthony Dominquez. Before going on the injured list with right triceps tendinitis on Aug. 20, Dominguez had a 1.64 earned run average, 54 strikeouts, 13 unintentional walks and zero unearned runs in 44 innings of work in 46 appearances. He also has a 6-4 record with nine saves.

Dominquez might be coming off the injured list this Friday when the team gets to San Francisco to play the Giants.  Coming into the stretch run of the season, the Phillies are going to need every arm to get into the postseason.

If there’s anything that bodes well for the Phillies’ playoff chances over the last 34 games left in the season is that out of the eight teams they’re playing to end the season, five  — the Washington Nationals, Miami Marlins, San Francisco Giants, Arizona Diamondbacks and the Chicago Cubs  — of them not only have losing records, all but two of them — the Diamondbacks and the Cubs — also have losing records against the Phillies. The Cubs are the only ones to have a winning record against the Phillies.

“Every game matters obviously, but we have more advantages than we do against other teams and those are the teams you have to care of,” said Phillies catcher J.T. Realmuto.

“Not only just last year, but since I’ve been here, we’ve played down to our competition sometimes. That’s a big difference in our season is that we go out there against the teams we should handle we’ve played pretty well against all season.

The Phillies continue their West Coast swing with three games in San Francisco against the Giants beginning this Friday night. You can catch the game beginning at 10 p.m. on Apple TV as part of its “Friday Night Baseball” series.