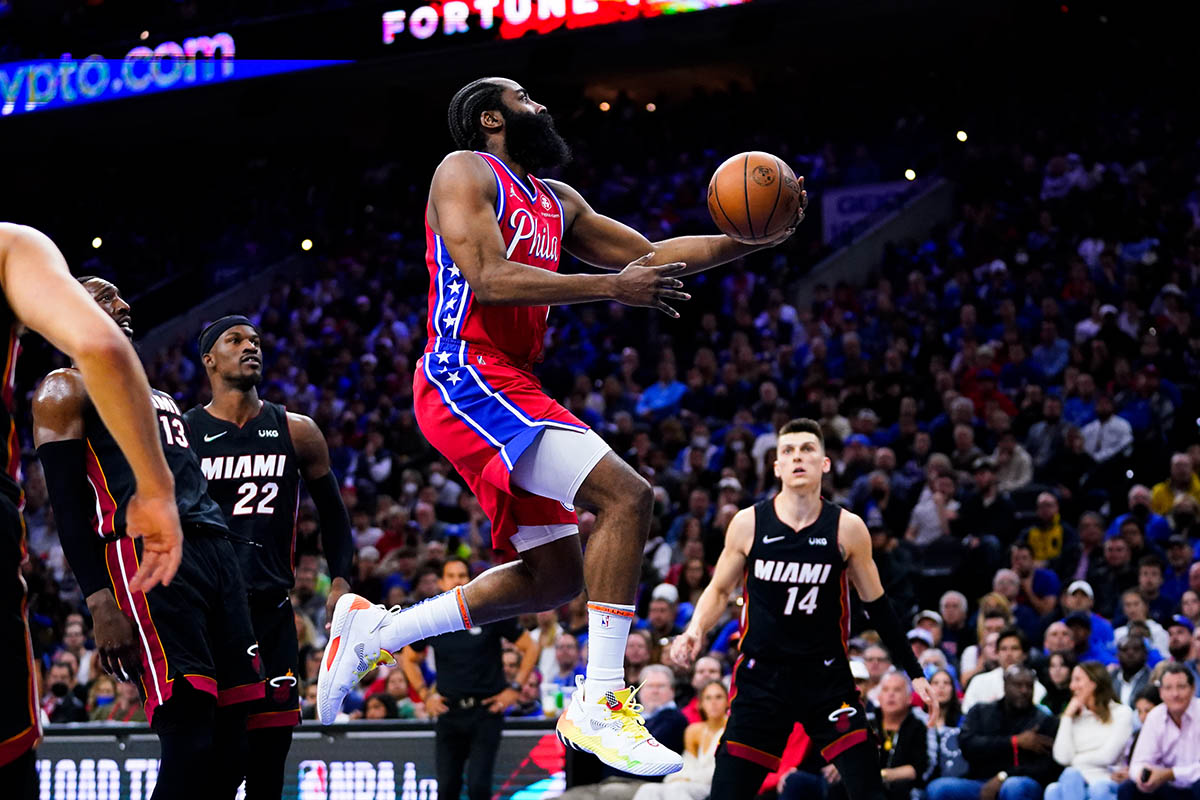 James Harden silenced his critics by coming up clutch and sending the Philadelphia 76ers back to Miami, tied 2-2 with the Heat.

Photo above: Philadelphia 76ers’ James Harden goes up for a shot during the second half of Game 4 of an NBA basketball second-round playoff series against the Miami Heat, Sunday, May 8, 2022, in Philadelphia. (AP Photo/Matt Slocum)

Throughout the Philadelphia 76ers 2022 playoff run, the biggest concern for Sixers fans has been whether point guard James Harden can come up big in clutch moments in the postseason.

When the team acquired him from the Brooklyn Nets back in February, his critics came out of the woodwork to say that Harden lacks that clutch gene in crucial situations in the playoffs.

That was definitely not the case for Harden in Game 4 of the Sixers Eastern Conference semi-final series against the Miami Heat at the Wells Fargo Center Sunday night. The former Arizona State star, who also had nine assists and seven rebounds, came up huge in the fourth quarter to silence his critics — at least for now.

With his team facing a possible 3-1 series deficit, Harden scored 16 of his team-high 31 points in the fourth quarter of the 76ers’ 116-108 win to even the series with the Heat at two games apiece. The series resumes Tuesday night in Miami for game 5.

“It was just James being James,” said Philadelphia 76ers head coach Doc Rivers. “He played great. I said it before the game [that] I felt like he was going to have a big game tonight. I didn’t know (Harden would score) 31 points and I didn’t know all the other stuff. You can just sense it.”

On a night when Miami’s Jimmy Butler, who scored 40 points, was nearly unstoppable, Harden hit the big shots in response to every Miami run in the fourth quarter.

“Man, that was great. That was amazing. It was great to see,” said Sixers guard Tyreese Maxey. “(Miami) was switching everything; we really didn’t have a lot of movement and a lot of continuity, so (Harden) hit some big one-on-one shots … It was (Harden’s) night to carry us to a win.”

Meanwhile, Harden said that nothing about himself changed other than the shots he was missing in previous games were starting to fall. Prior to Sunday’s game, he was 0-for-8 from three-point range in the fourth quarter of the Sixers’ last three playoff games.

“I just took what the defense gave me … same shots. I just made some,” Harden said. “Nothing really changed. I made some shots. Obviously, that’s a game-changer. Just being aggressive in that fourth quarter.”

Coming into Game 5 on Tuesday, Sixers’ forward Tobias Harris said the Sixers are going to need Sunday’s version of Harden to win the next two games of the series.

Most definitely, yeah, we need him to be aggressive, but he does a great job of evaluating the game where he can make plays, where he can take his shots,” Harris said.

“Tonight, he got going and you just see the confidence in him getting downhill first and then the three-ball opened up for him,” Harris continued. “What we really need him to do on a nightly basis is what he does, just be settled for us and really pick up on the defense of how they are playing him.”

Harden’s performance Sunday came at a time when Embiid hasn’t been his usual dominant self, despite scoring 18 points in Game 3 and 24 in Game 4. His presence in the low post in both Games 3 and Game 4 has helped his team get back in the series. It is yet more evidence that Embiid should be voted the NBA ‘s most valuable player.

“His defensive presence, his scoring — he does everything for us,” Rivers said. “We haven’t seen the best of Joel in this series yet. He’s still trying to figure out how to play with that mask sliding over his face and his hand. I think the best is yet to come for Joel.”

Maxeymus! Were you not entertained?