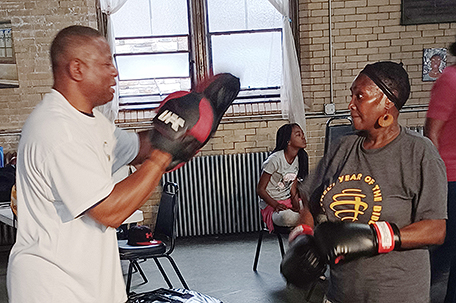 Martial arts teacher and 8th degree Black Belt master Lawrence Whitaker says that the driving force behind his free self-defense classes for women began back in 1998, when his sister was murdered by her boyfriend. That’s when Whitaker started to have workshops for young women to make sure that they knew how to protect themselves in dangerous situations.

As the founder of Urban Defense LLC in Philadelphia, Whitaker reaches out to women who are anxious to join his free self-defense classes. One of his well-known students was Kijafa Vick, wife of former Philadelphia Eagles quarterback Michael Vick. According to Whitaker, because she was already in great athletic shape, and was an easy person to teach.

The self-defense classes Whitaker runs haven’t stopped since his sister’s murder. In the beginning, he held free classes at 6th and Brown Street, but now he teaches a six-week class at Holy Apostles and Mediator Episcopal Church at 51st and Pine Street.  The classes are held every Wednesday evening from 6 p.m. to 8 p.m..

His classes are more than just teaching women how to throw punches — he teaches them different techniques that involves protecting their personal space when they are caught in a bad situation.

“You have to be aware of your surroundings,” said Whitaker, who was inducted in the Philadelphia Martial Arts Hall of Fame. “It’s not about punching someone in the face. There are five easy places where you can hurt a person and make your escape. You can hit them in the groin, poke them in the eye or you can also bite your attacker.”

Among the women who attends the classes at the church is Lorraine Thomas, who travels each week from Southwest Philadelphia to join the other women in the self-defense classes. So far, Thomas hasn’t missed a class. Every Wednesday, she enjoys the two hours of learning self-defense techniques from her instructor.

“At these classes, this is really a good workout,” Thomas said. “It’s really important to learn how to defend yourself. You get to learn about real boxing and the kick-boxing game. You are taught how to hold your hands. In his classes, you must pay attention and stay focused.”

Thomas and the other women are trying to encourage more women to attend the self-defense classes at the church. They feel his free classes are too valuable to ignore. Right now, Whitaker has about 30 students. He encourages them to wear sneakers and comfortable clothes such as sweatpants, t-shirts and leggings.

“I have been here since day one,” Thomas said. “After these classes are over, we are going to follow Lawrence Whitaker to his next class. One thing I love about his classes [is that] he teaches us martial arts, which is an eye-opener for all of us.”

At a time when carjackings, sexual assaults and abductions are occurring more frequently than ever before, Whitaker said the free classes are intended to help women. Recently, he told Fox 29 News he looks forward to starting a new campaign to recruit more women for his classes. He wants to reach out to more women across the city.

“By the end of next year, I hope to become the number one self-defense class for women in Philadelphia,” Whitaker said. ‘[There are] not too many martial arts instructors who [are] doing what I’m doing. Right now, the competition is very small. That’s the goal I have set for myself.”

In addition to being a 8th Degree Black Belt, Whitaker also served six years in the U.S. Army as a sergeant and has traveled around the world. He spent one week in Port-a-Prince, Haiti where he taught the people martial arts through the Free Angels Foundation.

Judging by his resume’, Whitaker has a bright future in front him. Right now, he hopes to make a bigger impact with his self-defense classes and hopes to keep the door open for more women to join his classes. His goals are within reach.