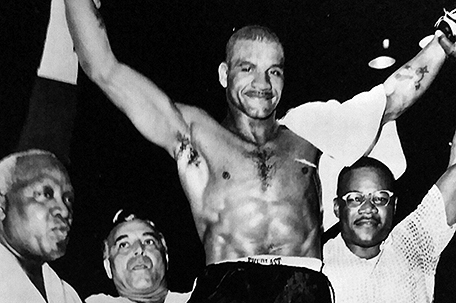 Former light-heavyweight champion Harold Johnson always made his presence felt in his old neighborhood of Manayunk-Roxborough even after his storied boxing career faded into sunset.

Whether he was playing with his jazz band at one of the American Legion posts in the ethnically diverse neighborhood or just talking to the young people he’d see on the corners, Johnson was a very visible part of the community.

“He cared,” said Joe Mathis, director of the Kendrick Recreation Center. “(Johnson) would ask a kid he didn’t even know, ‘Who are you and what’s your dad’s name or do I know you and who’s this guy’ and that would influence that kid. He was the champ.” 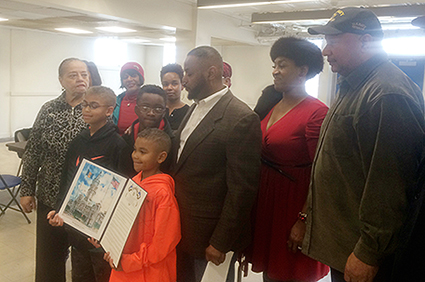 Now thanks to a new boxing gym at Roxborough’s Kendrick Recreation Center, Johnson’s name and influence will continue to serve as inspiration for the children of Manayunk-and Roxborough.

On Saturday, Johnson’s family joined Councilman Curtis Jones, and Jackie Frazier-Lyde, the daughter of the late Philadelphia boxing champ, Joe Frazier in dedicating the new Harold Johnson Boxing Gym at the center. The gym, which cost $500,000 to build, is an addition to the center.

“It’s a place for the youth to go and it’s a great thing,” Mathis said. “This keeps (Johnson) him involved and keeps his name alive. I’m honored to be able to do that for him and now his name is going to be here forever.”

The Rev. John Roberts, Johnson’s son, said he and his family are happy that his father is being honored by the city and his old neighborhood.

“It’s a great feeling for me and to the family because dad was a great fighter and it’s nice that Philadelphia recognizes their own,” said Roberts, who is the pastor of the Gardener of Prayer World Prayer Center. “To have this gym named after him is a great honor because this is where he grew up here in Manayunk… There’s no place like home.” 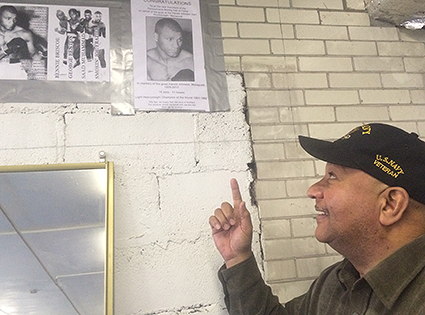 Rev. John Roberts proudly points to pictures of his dad, boxing champion Harold Johnson on the wall of the recreation center that now bears his name in his neighborhood of Manayunk-Roxborough.
(Photo: Chris Murray)

Councilman Jones said Johnson is to Manayunk-Roxborough what basketball legend Wilt Chamberlain was to Overbrook High School and West Philadelphia.

“He was the George Washington of boxing up here,” Jones said. “Therefore, just as important as Wilt Chamberlain was to West Philly and Overbrook, Johnson was as important to Manayunk and boxing.”

Boxing historian John DiSanto, who runs the website phillyboxinghistory.com, said naming the recreation center after Johnson will give young people in the community the opportunity to know who Johnson was and what he meant to this community.

“It’s a way of constantly introducing him to new people and for him to be an inspiration for kids to come into train,” DiSanto said. “The more places his name can be mentioned and included the better, he needs to be remembered.”

As a fighter, Johnson is known for being one of the most technically proficient fighters of all-time. He has fought and beaten some of the best boxers in the history of the sport including Ezzard Charles and legendary light heavyweight champion Archie Moore, who he fought five times. Johnson also beat Cuba’s Nino Valdez, a heavyweight contender in the 50s and 60s, and was a sparring partner for Joe Louis, arguably one of the greatest heavyweights of all time.

The 5-foot-11 Johnson won the undisputed light heavyweight championship in 1962 only to lose it in 1963 to Willie Pastrano in a controversial split decision. He had a record of 76-11 with 32 knockouts.

DiSanto said Johnson was an underrated in his time because of his humble demeanor, his technical fighting style and because he fought as a light heavyweight at a time when all the focus in boxing was on the heavyweights.

“His fights tended to go the distance and he was in a lot of chess matches,” DiSanto said. “He’s in the Hall of Fame and you can’t get any better than that. He’s not a household name, but in this area he’s a local legend for sure.”