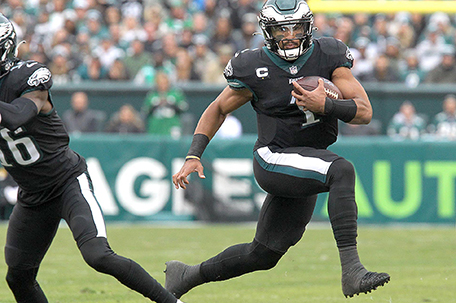 ABOVE PHOTO: Jalen Hurts becomes the first Eagles quarterback with three rushing touchdowns in a game.  (Photo by Webster Riddick)

As the Philadelphia Eagles approach the .500 mark, quarterback Jalen Hurts is shoring up his case to remain the team’s starting quarterback.

With six games left on the Philadelphia Eagles 2021 schedule, the jury is probably still out on whether the team and its fans view quarterback Jalen Hurts as the team’s “franchise” quarterback.

But over the last four weeks, Hurts is making it more than interesting by showing the fans and critics who doubted him that he’s not going down without a fight. The one thing that is becoming more and more apparent is that Hurts has that ability to will his team to a win.

And that’s an important intangible that will help Hurts convince the Eagles that he can be that franchise quarterback moving forward.

On third and six from the New Orleans 24, Hurts became a human highlight reel when he left Saints defensive end Carl Granderson looking silly on the ground as the Eagles quarterback raced his way up the middle of the Saints defense for the touchdown that sealed the game.

“When things break down and you can do stuff like that, it’s a gut punch to the (defense),” said Eagles right tackle Lane Johnson. “Having a guy that’s versatile makes the run game open and it makes it difficult for defenses.”

Ever since the Eagles decided to take a run-first approach to the offense, Hurts and the offense have found a rhythm. They have averaged 217 yards rushing per game over the last four games. Against the Saints, the Eagles rushed for 242 yards on the ground.

While Eagles running backs like Jordan Howard, Boston Scott, and Mile Sanders, who rushed 94 yards on 16 carries, have been the beneficiaries of the Eagles recent surge in the running game, Hurts’ dual threat ability has opened things in both the running game and the passing game.

“Any time you can run the ball like that, the linebackers have to respect it, the D-line has to respect it because they can’t straight rush up the field,” said tight end Dallas Goedert. “(Hurts) has been making incredible throws. You can see it each week in practice. His timing is getting better. His balls are just unbelievable. This whole week of practice, throwing it I was looking at him like you have a golden arm … If he keeps playing the way we’re going to be really good.”

On second and 11 from the Eagles 25, Hurts on a play-action fake to Sanders, hit a wide-open J.J. Arcega-Whiteside for a 23-yard gain to jump start that drive for the Eagles to close out the game.

That was mainly because the Eagles struggled to find any rhythm on offense because of an over reliance on the passing game.

But since Eagles started utilizing the running game more, it has become easier for Hurts to make plays in the passing game. In the win over the Denver Broncos, he threw two touchdown passes. In the loss to the Los Angeles Chargers, Hurts threw a game-tying touchdown pass to Devonta Smith.

So far this season, Hurts has completed 62 percent of his passes with 13 touchdown passes and just five interceptions. He has also rushed 618 yards with eight touchdowns.

With six games left in the season, I like Hurts’ chances for making the case that he’s going to be the franchise. He has the respect of his teammates and more importantly, he has the determination to make it happen.

“Slow and steady wins the race and continue to learn every day, daily deposits every day,” Hurts said. “Go in and attack every day and learn from everything we do… I like winning and that’s the most significant thing we’ll get of the day.”