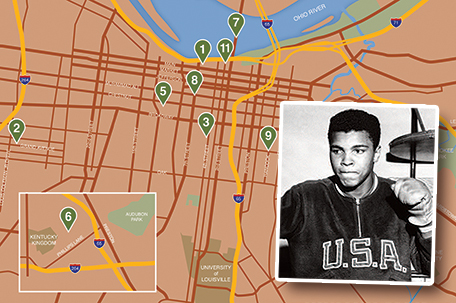 LOUISVILLE, Ky. — In the week of global icon and Muhammad Ali’s birthday, his hometown is honoring his lasting legacy by renaming the city’s airport.

“Muhammad Ali belonged to the world, but he only had one hometown, and fortunately, that is our great city of Louisville. Muhammad became one of the most well-known people to ever walk the Earth and has left a legacy of humanitarianism and athleticism that has inspired billions of people,” Louisville Mayor Greg Fisher said.

The vote came after a recommendation from a board working group that had studied renaming for more than a year.

“This is a historic day for the airport and our region,” said Jim Welch, chair of the Airport Authority Board. “By choosing to rename the airport for Muhammad Ali, a world-renowned humanitarian honored as a United Nations Messenger of Peace and an athlete honored as Sports Illustrated’s “Sportsman of the 20th Century,” we as a community are honoring his legacy and celebrating this global icon who is a fellow Louisvillian.”

Muhammad Ali’s widow, Lonnie Ali, said, “I am proud that the Louisville Regional Airport Authority and the City of Louisville are supportive of changing the name of the Louisville International Airport to reflect Muhammad’s impact on the city and his love for his hometown. I am happy that visitors from far and wide who travel to Louisville will have another touch point to Muhammad and be reminded of his open and inclusive nature, which is reflective of our city.  Muhammad was a global citizen, but he never forgot the city that gave him his start. It is a fitting testament to his legacy.”

The Airport Authority Board also authorized an agreement with Muhammad Ali Enterprises, LLC for use of Ali’s name.

Mayor Fischer said the airport renaming is just one piece of a much broader effort to share and celebrate Ali’s Louisville ties.

“As the city of Ali’s birth, and the place that throughout his life he proclaimed as ‘the greatest city in the world,’ It is our obligation and opportunity to showcase the many stories and complexities that made up the man known as ‘The Greatest of All Time,’” Fisher said.  “It is anticipated that the name change will help boost the existing programs meant to help people learn more about one of the world’s most recognized citizens.”

“Louisville Tourism applauds the proposal to reflect the legacy of the city’s most famous son,” said Karen Williams, its president and CEO. “Adding Muhammad Ali’s name to the Louisville International Airport reminds travelers from around the world that our city is a place to have a touchpoint with one of the most recognized icons of all time.  It supports current marketing efforts to engage in Ali’s ‘Footsteps of Greatness’ as a reason to inspire visitation to Louisville.”

“We are confident that with this announcement, Louisville will continue to be seen around the world as a bold, compassionate city, and prompt an increase in visitors to all our great attractions,” said Donald Lassere, President and CEO of the Muhammad Ali Center

For ideas on how to experience Ali’s Louisville: www.gotolouisville.com/ali