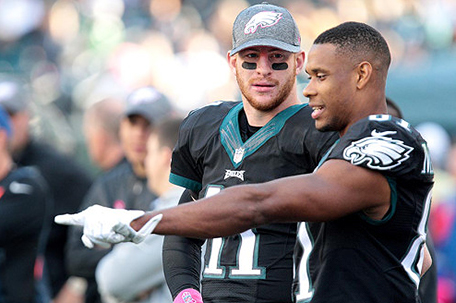 ABOVE PHOTO:  It’s been a tough year for Carson Wentz and Jordan Matthews.   (Photo by Webster Riddick)

With the playoffs obviously out of the picture for the Philadelphia Eagles (5-8), the only thing that diehard Birds fans can hope for is that the team can finish a respectable .500 and not have a second straight losing season.

Considering how this team has struggled, finishing at 8-8 isn’t going to be easy  for the Eagles because they face three playoff contenders to close out the season starting with Sunday’s road game against the Baltimore Ravens. The Eagles may not win another game if those games are must-wins for those teams. The Birds close out the season at Lincoln Financial Field against the New York Giants and the first-place Dallas Cowboys.

The Eagles 27-22 loss to the Washington Redskins was quite simply a microcosm of an entire season has gone wrong. The Birds certainly had their chances to win the game, but couldn’t get out of their own way with turnovers and penalties.

“Yes, those are the things that we talk about during the week,” said head coach Doug Pederson. “Again, I mentioned it to the team at the end in the locker room that if we figure out a way to eliminate those things, great things are going to happen to your team.”

Eventually, just not this year.

Throw in injuries at key spots and that’s your 2016 Eagles season in a nutshell. In this game, the Eagles lost long snapper Jon Dorenbos to a right wrist injury, which meant long-snapping duties were split between tight ends Brent Celek and Trey Burton. Right tackle Allen Barbre left the game with a left hamstring injury and right tackle Brandon Brooks was sidelined with an illness.

One of the most devastating blows to the Eagles was the loss of punt returner Darren Sproles who got hurt fielding a punt on a vicious hit by Washington defensive back Deshazor Everett, who drew unsportsmanlike conduct penalty and several members of the Eagles wanting to kick his ass. Sproles will likely undergo the concussion protocol.

With all the reshuffling on the offensive line, Matt Tobin, who normally plays guard, was moved to right tackle. It was his inability to block Washington linebacker Ryan Kerrigan that sealed Eagles fate. Kerrigan’s sack and forced fumble of quarterback Carson Wentz deep in Washington territory halted the Eagles comeback.

On offense, the Eagles outgained Washington but gave up two turnovers inside the red zone that might have made a difference.   On their second possession of the game, the Birds, who were leading 3-0,  had the ball at the Washington three-yard line only to have Wentz throw an interception in the end zone.  Wentz ‘s fumble after the sack by Kerrigan put the nail in the coffin.

The Eagles had another chance to put seven points on the board when Darren Sproles ran a punt back 72 yards for an apparent touchdown, but it was called back because Zach Ertz was flagged for an illegal block in the back.  With the other two turnovers, the Eagles blew a potential 21 points that could have tilted the game in their favor.

“Obviously, we’ve had a handful mistakes, little things here and there,” Wentz said after the game.  “And a lot of these losses, we’re just one play away, two plays away. … It’s kind of frustrating, but we have to learn from it.”

If there’s a silver-lining in this latest Eagles loss, the team did play with a lot of effort after they were criticized by Pederson earlier last week.  Just not enough to walk away with a win.

Unfortunately, these are the games you lose when you are a bad team. It’s always “shoulda, woulda, I wish I coulda” when you find yourself at the end of another loss.

One final note- one of the enduring symbols of the debacle that was the Chip Kelly era returned to bite the Eagles again. Redskins and former Birds wide receiver DeSean Jackson caught three passes for 102 yards including an 80-yard touchdown pass.

Strangely, enough Jackson wasn’t booed or jeered by fans. That’s because there’s a sentiment around Philly that they want D-Jax, who turns 30 next year, back when he becomes a free agent after this season. He’s definitely better than what they have now at the wide receiver position.

Jackson left open the possibility that he could be back.

Tweet Share Pin Email Informational Resources In response to the outbreak of coronavirus (COVID-19), the City of...

Tweet Share Pin Email ABOVE PHOTO: The Manhattan bridge is seen in the background of a flashing...